After a bullish start, here’s the stock market outlook for Biden’s next 100 days

If the stock market is considered a barometer of success, President Joe Biden’s first 100 days in office is starting off with a bang — a big bang.
Since the election, the S&P 500 is up more than 20%. Since his inauguration in January, it’s up 10%. 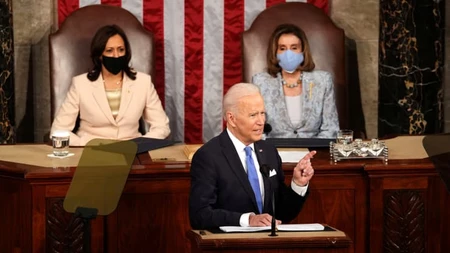 According to JPMorgan, that is the best 100-day run for a first-term president in more than 75 years. The only other one close was John F. Kennedy in 1963, who also saw a return north of 20%.
Investors, understandably, are more focused on the future. What will happen in the second 100 days?

What about the second 100 days?

Investors are focused on five major drivers of stock prices in coming months: the rate of change in earnings, the stability of profit margins, the future of the Biden legislative strategy, the Fed tapering and rate hikes, and the reopening and continued economic growth.

Earnings growth: With 50% of the S&P 500 reporting first-quarter earnings, the trend of outsized earnings beats has continued. Companies have reported beating earnings by an average of 22.7%, according to Refinitiv, way above the historic beats of 3%-5% that were typical prior to 2020. Moreover, more than 60% have seen second-quarter estimates raised, which is higher than the previous quarter.

“More analysts are raising estimates and at a faster pace,” said Nick Raich, who tracks corporate earnings at Earnings Scout. “The rate of change is accelerating, and that is what drives stock prices.”

Andrew Adams of Saut Strategy noted that EPS growth for the S&P 500 is now north of 30% in the first quarter compared with a year earlier, the best growth in more than 10 years.

“Such a high growth rate will almost certainly decline once the COVID shutdown impacts start to fall off, but there should still be a fairly low bar to beat in the next few quarters for many companies,” he said in a recent note to clients. “So for now the market just isn’t showing me a lot of reason to worry other than the fact that the large cap averages are hitting up against overbought levels.”

Stable margins: One major concern for corporate profits has been higher input costs, everything from packaging to transportation to fuel costs, which would adversely impact corporate margins. Several companies, particularly food and consumer companies, have reported higher input costs, but mostly without adverse consequences. FactSet reports that blended corporate margins for the first quarters are at 11.6%, the third highest level since tracking began in 2008. They expect that to hold above 11% for the rest of 2021. The main reason: Many companies have successfully announced they were raising prices to keep up with the higher costs, thus maintaining margins.

“Investors have not punished companies for raising prices,” Raich told me.

The future of the Biden legislative strategy. The president has proposed two major additional pieces of legislation, the American Jobs Plan and the American Families Plan, both of which could impact stock prices this summer. Biden on Wednesday night unveiled details of the latter, a $1.8 trillion package of spending and tax cuts. While restoring the top individual income rate to 39.6% and taxing capital gains as ordinary income for households making over $1 million have caused some ripples among investors, most believe that any tax hikes will come in at far lower rates than those proposed.

“In our view, a capital gains tax increase looks more likely to come in around 28%,” Goldman Sachs’ Jan Hatzius wrote in a note to clients.

The Biden administration has also proposed higher corporate taxes, but most analysts also argue that the increase will be far more modest than the proposed 28% rate.
John Normand of JPMorgan summarized the current consensus on the impact of the proposed tax hikes on stocks: “The view since the 2020 campaign has been that a higher corporate rate would lower S&P500 EPS by several dollars, but within a surging earnings growth environment driven by greater fiscal outlays and vaccine-driven reopening.”
In other words, higher taxes will likely be more than offset by stimulus and the reopening. Not surprisingly, JP Morgan has made no changes to its year-end S&P target of 4,400.

The Fed tapering and rate hikes: Few issues have caused more debate than the timing of when the Fed will raise rates and begin tapering its $120 billion a month bond buying program.

At his press conference Wednesday, Fed Chairman Jay Powell reiterated: “We would have to have made very substantial progress in getting the virus under control” before the Fed would consider tapering, and again insisted that any price increases are likely to be “temporary.”

How long it will take for the Fed to feel that the virus is “under control” is hotly debated. Some, like Adrian Miller, chief market strategist at Concise Capital Management, believe the Fed will begin tapering in 2021: “The Fed is likely to begin tapering in the fourth quarter. By June several million more people are likely to be back in the labor market. It might be a modest tapering, but we will be far enough along in the labor market recovery by the third quarter that some tapering is likely in the fourth quarter,” he said.

More typical is Guggenheim’s Scott Minerd, who tweeted this shortly before Wednesday’s Fed announcement: “The market is being too aggressive on timing of tapering (Q4 2021) and first rate hike (Q1 2023). Under the new framework, the first rate hike could be pushed back to 2025.”

The reopening and continued economic growth: Just as stock pickers are paid to sniff out peak earnings growth, economists are paid to sniff out peak economic growth. Most still expect that the best news is still coming. Typical is Lori Calvasina from RBC Capital Markets, who in a note to clients said that while economic forecasts for 2021 are high and going higher, this has not yet impacted perceptions about 2022: ″One piece of good news is that 2022 forecasts haven’t gone down, suggesting that 2021′s faster and more powerful recovery in the economy hasn’t borrowed too much from against 2022′s growth outlook yet.”

The biggest problem for stocks in the second 100 days

The biggest problem for stocks going into Biden’s second 100 days may not be related to the economy at all. Stocks may simply prove to be a victim of their own success.

“Peak everything” is a common refrain among investors, the concern that economic growth is peaking this summer, along with the rate of change in earnings growth. The data we have, many argue, is as good as it gets.

Companies have reported boffo earnings since the reporting season began two weeks ago, but the broader market has remained unchanged which, JPMorgan’s John Norman says, gives some credence to those concerns.