For the World Economy, a Grim Slog Tempered by New Hopes

Nearly a year into a pandemic that has ravaged the global economy like no time since the Great Depression, the only clear pathway toward improved fortunes is containing the virus itself. 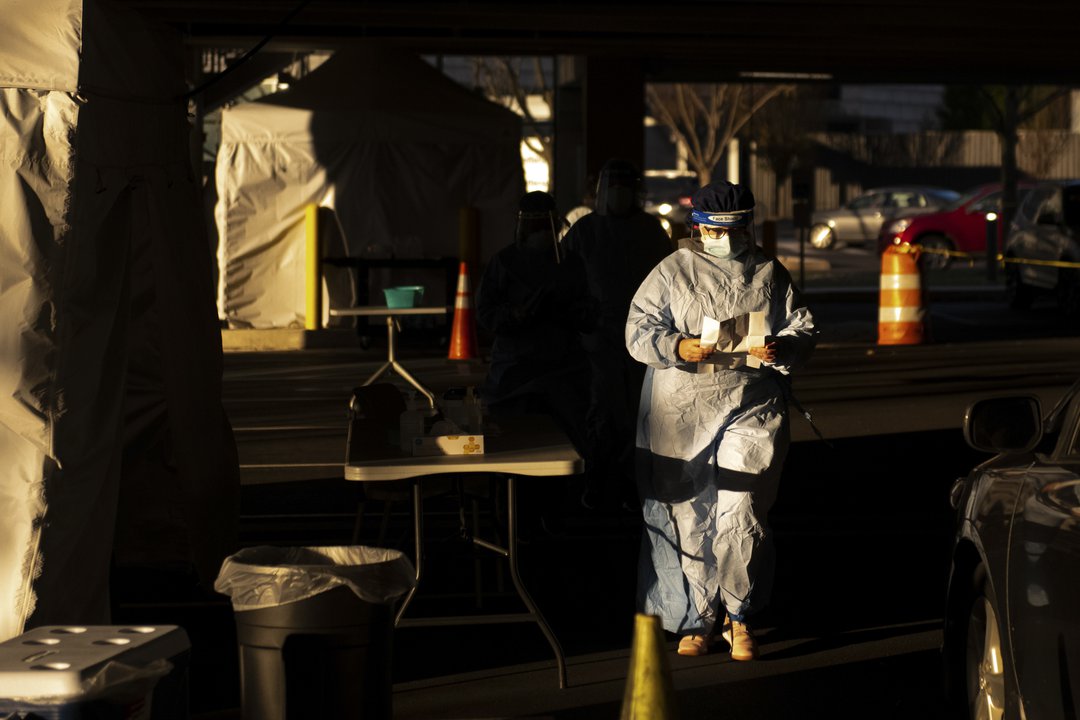 With the United States suffering its most rampant transmission yet and with major nations in Europe again under lockdown, prospects remain grim for a meaningful worldwide recovery before the middle of next year and far longer in some economies. Substantial job growth could take longer still.

A significant hope has emerged this month in the form of three vaccine candidates, easing fears that humanity could be subject to years of intermittent, wealth-destroying lockdowns. But significant hurdles remain before vaccines restore any semblance of normalcy. More tests must be conducted and vast supplies manufactured. The world must navigate the complexities of distributing a lifesaving medicine amid a surge of nationalism.

The very concept of normalcy now seems open to question. Even after the coronavirus is tamed into something familiar and manageable like the flu, will people habituated to keeping their distance from others return to restaurants, shopping malls and entertainment venues in the same numbers? With videoconferencing established as a replacement for business travel, will companies shell out as much as before to put them on airplanes and in hotels?

Calculating the prospects for a vigorous economic recovery entails wrestling with questions of human nature. The Depression imprinted a generation with a tendency toward thriftiness and an aversion to risk. If frugality endures this time, that would have profound and enduring economic consequences; consumer spending typically makes up two-thirds of economic activity in countries like the United States and Britain.

“If you’re a business, you might be a bit more wary about taking on staff again,” said Ben May, a global economist at Oxford Economics in London. “You might make do with overtime for a while. Households might behave more cautiously. If that’s the case, you run the risk of economic scarring further down the line.”

Long-term damage on top of the recent economic devastation would add to the inequality that has been a central feature of recent decades, as people with greater education, advanced skills and access to stock and real estate markets harvested the winnings of expansion, while others struggled.

The pandemic has made the world more so. It has concentrated its lethal force on blue-collar workers, for whom human interaction is a necessity, striking people who labor in warehouses, slaughterhouses and frontline medical facilities. Professionals able to work from home have maintained their safety along with their incomes.

The industries that face the greatest challenges in recovering — airlines, hotels, restaurants and retail — are major employers of lower-skilled workers, and especially women.
At a time when companies are under pressure to make their workforces more diverse, the likelihood that many people will continue working from home threatens to impede entry and promotion for women and minorities. Breaking into established ranks and altering culture is not a process best conducted over Zoom.

That could limit economic dynamism. “Growing inequality is terrible for economies because consumption is reduced,” said Ian Goldin, a professor of globalization and development at Oxford University, and author of “Terra Incognita: 100 Maps to Survive the Next 100 Years.” “A smaller share of your economy is able to buy your goods and services.”

What has been challenged most directly is the popular notion that the world economy could simply endure a deep freeze to contain the pandemic and then revive, almost as if nothing had happened. The idea was that public largess could support workers and keep businesses alive during the short, sharp downturn required to choke off the virus, before commercial life recovered.

This sort of thinking was the basis for forecasts of a so-called V-shaped recovery: The astonishing collapse of major economies in the first half of the year was supposed to be followed by an equally astonishing revival.

But the global economy does not come with an on-off switch. After marked improvement in the late summer, the surge of virus cases has destroyed the hopeful scenario. The strains of the catastrophe — from failed businesses and elevated joblessness to disrupted education — appear likely to endure, potentially for years.

When the novel coronavirus first captured attention in China early this year, it prompted grave worries about a global shock. China was the world’s second-largest economy, and a voracious purchaser of goods and services, from raw materials like soybeans and iron ore to the latest gadgets from Apple. Its factories produced electronics and apparel, chemicals and construction supplies, auto parts and appliances. Disruption in China was certain to ripple outward.

The threat intensified as the virus spread to Europe, shutting down commercial life in Italy’s industrial heartland and then spreading to factories across the continent. As the pandemic assailed Europe and then North and South America, governments ordered businesses closed to halt the virus. The economic unraveling proved more intense than the global financial crisis of a dozen years earlier.

World leaders drew on the playbook from that episode, unleashing trillions of dollars of credit via central banks and direct government spending. European nations effectively nationalized payrolls to prevent layoffs. The United States delivered expanded unemployment benefits. All of this eased fears of a cascading run of bankruptcies and a potential financial crisis.

After initially covering up the epidemic, China mobilized aggressively to contain it. Its factories roared back to life, and its 1.4 billion people resumed spending, making China a rare engine of growth in the world economy.

In Europe, the apparent containment of the virus in the summer months along with the lifting of government restrictions prompted people to emerge from their bunkers, taking holidays, going out to eat, and generating optimism for a recovery.

Between July and September, most major economies expanded dramatically. The United States grew more than 7 percent compared with the previous quarter, and Germany by more than 8 percent. The United Kingdom expanded by nearly 16 percent, and France by a whopping 18 percent. Such performances were embraced by some as proof that economies would snap back as soon as the virus was gone.

Conditions appeared ripe for robust spending. Unlike in the aftermath of the global financial crisis, when households were contending with crippling debts — especially in the United States — many households in large economies are this time flush with cash, given the enforced savings regimen of the lockdowns.

“You have a lot of pent-up money,” said Kjersti Haugland, chief economist at DNB Markets, an investment bank in Oslo. “This is definitely a scenario for a rebound.”

Yet the exuberance of the summer also appears to have rendered the populace vulnerable. The French thronged cafes and Britons returned to the pubs. Americans disdained masks as a supposed affront to civil liberties. The virus commenced spreading, triggering a new round of lockdowns that have destroyed hopes of recovery this year.
Most economists assume that Europe will register a contraction over the last quarter of the year. Britain’s economy is expected to shrink by more than 11 percent this year, according to Oxford Economics, and will struggle to mount a full recovery before 2022. Among the worst-performing major economies is India: Its economy contracted 7.5 percent in the three months that ended in September compared with a year earlier, government figures showed on Friday.

The world economy will contract by 4.4 percent this year, the International Monetary Fund forecast in its most recent assessment. World trade is on track to fall by as much as 9 percent this year, according to an assessment from the United Nations Conference on Trade and Development.

Next year, the world economy is expected to grow by 5.2 percent, according to the I.M.F., but that would still leave it only 0.6 percent larger than in 2019. Joblessness would remain elevated. Poor countries would continue to suffer a drop in earnings sent home by migrant workers. Malnutrition would climb.

In the United States, the defeat of President Trump by Joseph R. Biden Jr. has yielded optimism that a sustained and serious attack on the pandemic will now be waged. But the prospect that the incoming administration will be constrained by Republican control of the Senate — pending a pair of runoff elections in Georgia — reduces the likelihood that the government will agree on a robust package of spending measures to stimulate the economy.

Questions about next year center on how soon vaccines reach the bloodstream of the masses. The three candidates so far, from Pfizer, Moderna and AstraZeneca, have produced a credible vision of an end to the agony. But the economic pain has become so intense that its effects may linger.

The infusions of relief from central banks have propped up solid and flimsy companies alike. Many of the weak will eventually succumb, especially as aid is withdrawn, costing jobs. The pandemic has accelerated a pushback against globalization that may inspire multinational companies to make more goods in their home markets, while cutting costs through automation — limiting job and wage growth.

Poor and developing countries went into the pandemic facing alarming levels of debt. Promised aid from international institutions like the International Monetary Fund and the World Bank have proved disappointing. Private creditors have withheld debt relief.
Some argue that the pandemic should be the impetus for new economic models that create jobs through a transition to green energy while spreading the gains more equitably.
“What I’m allergic to at the moment is the notion of going back, bouncing back,” said Mr. Goldin, the Oxford economist. “It’s business as usual that got us to where we are.”