Yesterday’s announcement that consumer prices had risen 4.2% over the past twelve months has led to an explosion of news articles and even a stock market sell off. To be fair, some of the pieces have been relatively calm, but others are already calling for significant changes in policy. One thing they all have in common, however, is a poor understanding of inflation. 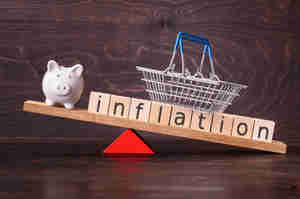 It’s not entirely their fault. Mainstream economics’ explanation of inflation is dangerously off target. It took me many years to finally break free of what I’d been taught in my undergraduate and graduate school days. But break free I finally did, and I hope you can, too. Inflation isn’t always bad. Consider the following…

1. Inflation doesn’t hurt everyone because it’s a redistribution–not a net loss–of income

Perhaps the most pervasive inflation myth is that it’s a net loss for society. If prices are increasing, then we are all worse off! This misunderstanding is the primary reason for the current panic and it’s the motivation behind the Federal Reserve’s destructive policy of hiking up interest rates every time it appears that the economy is growing rapidly.

But the fallacy here is so obvious that my students get it every time:

ME TEACHING MACRO: If you are paying more, then someone is…

MACRO CLASS IN UNISON: …getting more!

Precisely! Inflation is always and everywhere a redistribution of income. During the terrible inflation of the 1970s, those who were paying higher prices saw their income go to the oil industry and oil exporting countries. At the end of the 1960s, the wage-price spiral was leading to an increase in the standard of living for unionized labor and monopolistic firms. The massive jump in prices in 1946, a result of pent-up wartime demand being finally let loose, greatly benefitted the producers of the no-longer-rationed consumer goods.
The cause and consequence of each of these is very different, but whatever the case you must always begin by asking yourself: “Who is gaining?”

Someone most certainly is and you might find that you believe that the redistribution toward them is actually warranted—they should be earning more. More on this below.

There are many things the market system does poorly. At the top of that list is creating a job for every willing worker at a wage consistent with the standard of living our resources and technology can support. Labor is, after all, a cost to the private sector. Businesses are incentivized to use as little as possible and at the lowest wage they can pay.

On the other hand, something the market system can accomplish with some success is to alter production and consumption patterns in a manner that creates, at least in most instances, a more effective use of our resources. For example, right after COVID started, the price of medical-use alcohol shot up. This is inflationary because inflation is simply an average of all prices (weighted by consumption patterns). Granted, under the circumstances inflation was not going to accelerate given the downturn in the rest of the economy, but what if the jump in demand for alcohol had not been related to something that caused a deep recession? Should the Federal Reserve have then stepped in and thrown the economy into a recession so deep that no one could afford alcohol? Or should they allow prices to rise and thereby induce manufacturers to produce more and consumers to seek substitutes? Which one of those makes more sense?

Unfortunately, standard operating procedure at the Fed (which we avoided during the alcohol price rise because of the deep declines elsewhere) dictates that the right answer is the recession. It does not matter to them what causes the inflation, whether it be bottlenecks in the supply chain, high levels of demand for particular goods (it’s never all goods at once, incidentally, it’s always in particular sectors), or the monopolistic power of particular firms. But none of those is truly solved by recession. The first two should be allowed to play out so that production and consumption patterns change as suggested above, while in the last case the market power that is the real problem is left virtually untouched.

Speaking of which, did you know that what was at the time the worst recession since the Great Depression was caused intentionally by the Federal Reserve? It was in response to the price increases caused by the monopolistic OPEC, and of course had no effect on them. It simply added insult to injury.

3. Inflation can result from socially beneficial developments like rising wages

As an expansion continues, wages tend to be bid up. With the tremendous evidence that US income distributions have been becoming increasingly unequal over the past forty years or so, that’s something to be welcomed. If we want the current trend to be reversed, workers—especially those at the lowest end—need to earn more.

Everything else being equal, that raises prices. And that’s okay. If an industry can only exist by paying starvation wages, then it shouldn’t exist. The industry with the highest percentage of minimum wage workers in 2017 was leisure and hospitality, where “About three-fifths of all workers paid at or below the federal minimum wage were employed in this industry, almost entirely in restaurants and other food services.” If our society has an issue with them earning more, then we have a moral problem, not an economic one.

Unfortunately and to repeat a common theme here, standard operating procedure at the Federal Reserve is to actively stop the sort of economic expansions that may raise wages by inducing a recession. Little wonder profits have risen while wages stagnated.

4. Money supply growth does not, indeed cannot, cause inflation!

I’m not sure this should be included as a reason to not be panicked, but it’s a common myth that I feel compelled to address. The idea that money growth caused inflation always bothered me when I taught it because something didn’t feel right. How could the Fed, whose policies create no new income and only cause assets of the same value to change from one form to another, cause inflation? People are no wealthier after a monetary expansion, they just hold cash instead of T-Bills. Fiscal policy CAN cause inflation, as it did in World War Two, but not monetary. Monetary policy does not create new spending, as Friedman argued with his helicopter example. There’s a reason he used a helicopter and not real-world central bank policy: it was the only way he could come to his preferred, but false, conclusion.

What does the announcement look like in the context of the above reframing? First and foremost, you want to ask how income is being redistributed—because not everyone is worse off. The bottom line is that the economy is opening back up, helped by vaccinations and stimulus money, while firms continue to face COVID-related bottlenecks. These are affecting different industries to a different extent. In April, the biggest increases were in used cars and trucks (10%) and transportation services (2.9%). Over the past year the biggest jump by far was in energy prices, at +25% (this is before the recent ransomware attack, incidentally), while used cars and trucks followed closely at 21% (look at Table 7 for a detailed breakdown). These are among the winners—do we throw the economy into a deep recession to keep used car prices from rising? Does that make sense? Or do we allow those prices to rise and then affect entrepreneurs’ decisions about what to produce for tomorrow?

And we are seeing other industries start to face shortages:

“Businesses can’t keep up in demand, a problem exacerbated by ongoing bottlenecks in the global trading system tied to the pandemic. Computer chips are especially in short supply and that’s held up production of new autos and other manufactured goods. Americans are also rushing to dine out, travel or go far away for vacation, activities they shied away from during the pandemic. That’s also driving up prices at popular vacation resorts and other venues where people plan to congregate.” MarketWatch

So? That’s what’s supposed to happen in a market system: those selling the products in highest demand get to raise prices. Good for them.

And “A tight job market is contributing to the increase.” I ask again, why would we stop this? Should hotels and resorts not benefit from the fact that people are flocking back? Shouldn’t the workers for in-demand industries also benefit? Why would we follow the Fed’s blueprint and stop that?

If the cause of inflation is monopolistic suppression of competition, that’s a real problem that should be addressed (just not with monetary policy!). If it’s bottlenecks and increased demand, that’s a profit opportunity waiting to be exploited. For crying out loud, when the market actually does something useful, leave it alone.