Despite 40 million people filing for unemployment benefits since the start of the pandemic, there are a number of sectors that haven’t shown their full extent of layoffs. A number of large employers, like airlines, have held off on vast cuts.

This could lead to a rash of further layoffs. Airlines, for example, are prohibited from cutting their workforce via layoffs until September 30, in order to obtain government bailout funds. 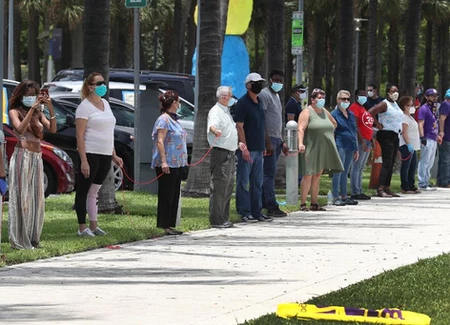 Yet, this week, many airlines began to urge workers to leave on their own. American Airlines will offer buyout packages and early retirement to 30% of its workforce, or 5,000 people. United and Delta have similar plans in place.

Airline industries aren’t alone in this. Goldman Sachs has estimated that unemployment will reach 25%, which would include millions of more seeking unemployment checks over the next few months. May is expected to end with an unemployment rate of 20%. For older workers, this depth of layoffs could force them to, in essence, retire early. Yet, most people don’t have a retirement backup plan if they suddenly find themselves pushed out of the nine-to-five.

Only one-in-three people within the Boomer age group and 30% of those of Gen-X have a backup plan if they’re forced into early retirement, according to new research from Transamerica’s annual survey of workers. It’s particularly concerning since getting forced into retirement is the primary way in which most workers leave. Often it’s health that can cause the early retirement. Other times, it’s an inability to find another job (at least in the field you know). With the high unemployment numbers, and more to come, the rate of early retirees could very well rise.

If that retirement hits before you’ve properly prepped for your post-work life, then you could find yourself scrambling, overextending the retirement accounts and leaving your later years at dire risk. Here are two things you can do to prepare a back-up plan, to ensure if you find yourself in early retirement, that it won’t lead you into financial ruin.

Calculate What You Need For A Good Retirement

To understand how much you’ll need in retirement, you can use some basic math to estimate. Take your expenses – particularly the expenses you expect to have year by year in retirement – and multiply that number by 25. This will give you an estimate of what you will need, if you plan to take out 4% of the retirement portfolio each year.

Say you spend about $40,000 a year, then you would need $1,000,000 in your accounts in order to have a strong likelihood that your money will last through your retirement.
If you’re short of the mark, you can account for it by reducing your expenses.

Maybe it’s time to downsize the house. Or maybe by simply reducing the number of trips you take each year, you can cut a large chunk of your expense line. Or maybe it’s finally time to move to that lower cost of living town.

Whatever you can do to reduce the expenses will have dramatic impact on how much you will need, based on your spending. Say you cut your spending to $30,000 a year. Then you would reduce the average amount you need in your portfolio by $250,000, based on the 4% rule.

Another option to extend the portfolio further? Work in another capacity, even if you no longer can find a full-time job within your own profession. It’s not what most people plan to do.

According to the Transamerica study, only 11% of Boomers and 15% of Gen-X expect to fund part of their retirement by working in some fashion. It’s one, though, that can allow your portfolio to breathe a bit, since you’re not taking the full amount of your expenses out of the portfolio during your earlier retirement years.

As Covid remains an issue, finding another gig might prove difficult. But as cities recover, then your ability to find a part-time job that covers a percentage of your expenses can cut the amount you need. Say you have a part-time job that pays you $20,000 a year (half of your annual expenses) for 10 years and you spend $40,000 a year for the 20 following years of full-time retirement. That cuts your average expenses in retirement down to $33,000 per year. The amount you would need to save would fall to under $850,000.

This strategy could work particularly well for those that plan to continue in their job until their mid-to-late 60s. It’s not a goal most people reach. More than half (55%) of workers that expected to work until 66 were forced to retire before they reached that age, according to the Center for Retirement Research at Boston College, due to health, employment or family shocks.

Sometimes the need for a backup plan has to do with the realistic expectations you’ve placed on your ability to fund and build the portfolio. Getting forced into early retirement could put those expectations to the test.

This article was written by Ryan Derousseau from Forbes and was legally licensed by AdvisorStream.