How Vulnerable Is U.S. Housing To Fed Tightening?

Financial markets have turned volatile since the beginning of this year as investors assess how much the Federal Reserve will tighten monetary policy. Leading up to the FOMC meeting in December, Fed officials had pivoted away from their stance that the spike in U.S. inflation to a four decade high was temporary, and markets took the news that the Fed would begin raising interest rates this year in stride. 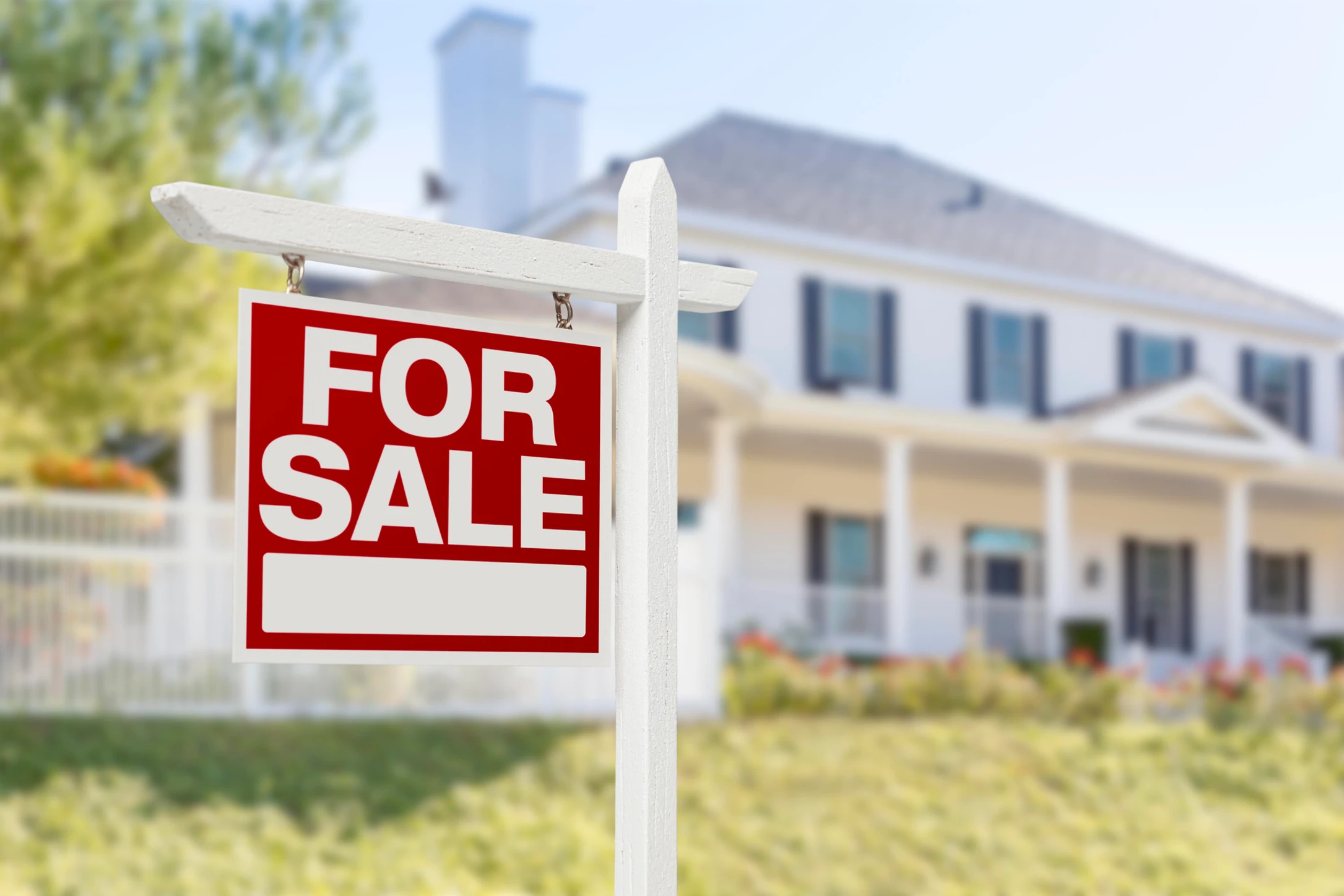 In the meantime, however, investors have grown wary that the Fed could accelerate the pace of interest rate hikes and allow its holdings of government bonds and mortgage-backed securities to roll off its balance sheet. This contributed to a 30 basis point increase in long-term government bond yields in January and a stock market selloff with the major indexes near correction territory.

Mortgage rates have also been impacted. The average 30-year fixed-rate home loan has increased to 3.6% from 3.1% at the end of last year. This is the highest level since the coronavirus pandemic struck two years ago, which raises a question about how the U.S. housing market would respond to ongoing Fed tightening.

The consensus view among housing experts at the start of this year was that the housing market would start strong but could cool off later this year. The Case-Schiller Home Price index rose by 18% in the 12 months ended November and by 27% since March of 2020.

Most commentators do not believe housing is a bubble, because demand-supply conditions are very tight with the inventory of homes for sale near record lows. According to the National Association of Realtors, one third of home buyers last year paid more than the list price. Redfin data indicate that the typical home sold in 15 days and more than 60% went off the market in two weeks.

Also, conditions are very different from the mid-2000s when financial institutions extended mortgages to borrowers who could not afford home prices by offering teaser rates that were adjustable over time. That said, the combination of escalating home prices and rising mortgage rates could force potential buyers out of the market as homes become less affordable.

The chart below shows two metrics of home price affordability. The orange line is the ratio of the average home price to income based on average hourly earnings. It shows home prices are elevated today at about 7.5 times versus a historic average of 5 times. Using this metric, the housing market appears very pricy for many Americans and is just below the peak of 8 times during the mid-2000s.

The blue line, by comparison, shows the ratio of monthly payments (based on the cost to finance the average home price at the prevailing 30-year fixed rate mortgage) versus income. This ratio shows valuations are in the middle of the range in the post-Global Financial Crisis (GFC) period. It is currently approaching 40% of income, well below the peak level of 60% in the mid-2000s. 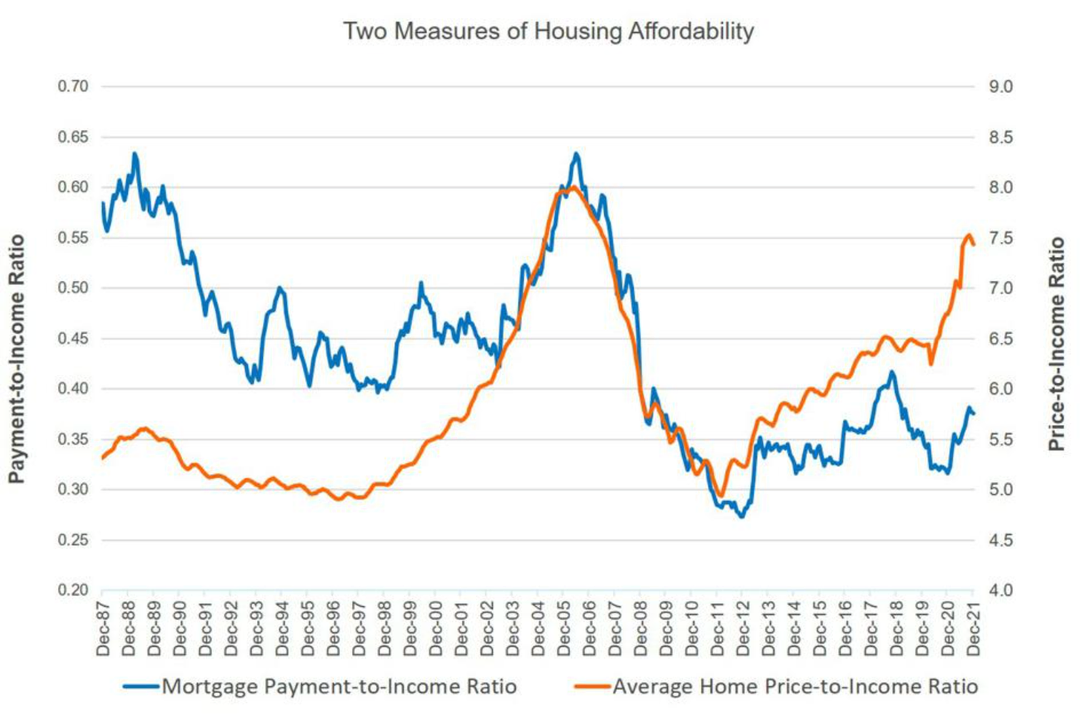 The chart illustrates how record low interest rates have made housing affordable for many Americans despite surging home prices. At the same time, it suggests they could become less affordable if the Fed were to raise interest rates significantly.

So how high can mortgage rates rise before home prices become unaffordable for potential buyers?

While there is no definitive answer, affordability likely would become an issue if the ratio were to approach or exceed 50% of income, as housing would become a disproportionate share of peoples’ incomes. There are a variety of combinations of home price increases and mortgage rates that could generate such an outcome: For example, if home prices were flat and the rate for 30-year mortgages approached 5%, or if home prices rose by 10% and mortgage rates reached 4.25%.

Until recently, this did not appear to be an imminent threat. Most investors thought the Fed would wait until midyear to begin tightening policy, and would then proceed to raise rates very gradually. The statement accompanying the January FOMC meeting , however, suggests that the Fed is contemplating raising rates in March by a quarter-point and continuing on a quarterly basis.

This presumes that inflation will recede in the second half of this year and approach 3% or less by year’s end. Yet, if inflation stays elevated at 4%-5%, the Fed may be compelled to raise rates much quicker – perhaps by as much as 150 basis points this year with further increases likely next year.

The main risk to the housing market, therefore, is that mortgage rates could rise by more than was expected just a few weeks ago. For example, a Washington Post survey of housing experts at the beginning of this year showed a range for 30-year fixed mortgage rates of between 3.5%-4.0%.

However, with rates already above the lower end of this range, they could easily surpass 4.0% this year and possibly reach 4.5%. In that event, some of the hottest markets such as Phoenix, San Diego and Tampa, which experienced price appreciation of 25%-35% last year, could see demand weaken and home prices languish or even fall as inventories build.
Finally, while the housing market is likely to be impacted by Fed tightening, it may still be attractive to investors because it offers better protection against inflation than stocks or bonds. This lesson was learned during the high-inflation environment of the 1970s when bond yields and mortgage rates reached double digit levels, and housing proved to be a good store of value in comparison with stocks and bonds. While a repeat of the 1970s is not in the cards, homeowners today are less at risk of seeing large price declines in their houses than in financial assets.