If Crypto Crashes Tomorrow, It’s No Big Deal. In Five Years, It Might Be.

“Have fun being poor!”

That’s the classic retort to people skeptical about surging cryptocurrencies from those who got in early on the speculative frenzy. It implies, of course, that those early buyers consider themselves rich. But are they really? One way to answer that question is to imagine what would happen if their newfound wealth went “poof,” aside from sparking lots of schadenfreude that is. 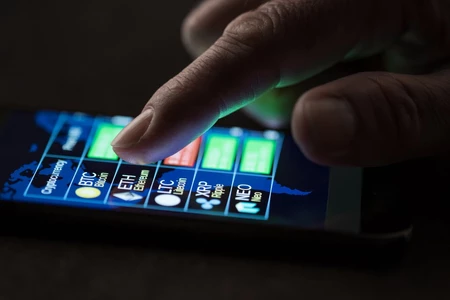 The price of bitcoin—the most established of the private digital currencies—has risen about 290% over the past six months, but that is nothing compared with some other entrants. Ether, which is the second-largest cryptocurrency by market value, rose about 710% during that time. And dogecoin, which was started as a joke, rose about 23,000%.

Over that six-month period, the combined value of all cryptocurrencies tracked by coinmarketcap.com—and there are thousands of them—has risen from $427 billion to $2.4 trillion. On the one hand, that is dwarfed by the over $20 trillion in equity Americans have in their homes, or the more than $50 trillion value of the U.S. stock market. On the other, it is approaching the $2.6 trillion that investors around the world have riding on gold.

Similar to gold, it is hard to figure out what type of valuation cryptocurrencies should carry. They don’t provide a stream of income like the earnings that stocks generate and they aren’t fundamentally useful in the way that physical commodities such as copper are. Unlike standard currencies, they aren’t backed by any government—a desirable feature in the eyes of many fans.

Moreover, while there are some businesses that accept cryptocurrencies as payment (for example, you can buy a Tesla with bitcoin), and they are very useful for illegal transactions, so far they are primarily used for speculation: People buy cryptocurrency because they believe they can sell it at a higher price in dollars later. Some might have a theory as to why—they believe dogecoins will be a good hedge against a coming wave of inflation, for example, or that bitcoins will become a standard method of payment. Others are merely counting on some more enthusiastic buyer making them rich—another iteration of the greater-fool theory that has been a recurring feature of financial markets over the centuries.

The danger is that the optimists could be wrong. Cryptocurrencies might not turn out not to be as good an inflation hedge as other assets, for example, assuming the inflation wave actually comes. Or central banks decide to offer their own digital currencies, creating an easy electronic payment system that leaves bitcoin on the outside looking in. Or maybe the market just runs out of greater fools.

Crashes can happen, after all. Bitcoin fell over 80% during a yearlong decline that started in December 2017. But at that 2017 peak, all the cryptocurrencies out there were valued at about $580 billion, according to coinmarketcap. The amount of paper wealth that could evaporate is much higher today.

Would a cryptocurrency crash matter for anybody other than those left holding the bag? Sort of. Losing wealth can lead people to spend less since the futures they thought were paid for no longer exist, and that can dent the economy. But with all cryptocurrencies valued at $2.4 trillion, such wealth effects might be muted in a crash. The dot-com collapse, which economists view as fairly well contained, wiped out $6.5 trillion of U.S. stock market wealth between the first quarter of 2000 and the third quarter of 2002, Federal Reserve figures show. And back then the U.S. economy was half the size it is now.

Beyond that, as speculative and extremely volatile assets that most people don’t own, and which aren’t integrated into financial markets, cryptocurrencies appear isolated from the economy. “They’re kind of their own show,” says University of Toronto economist Joshua Gans.

The environment could change if more people start thinking of cryptocurrencies as an asset class and if it starts working its way into retirement accounts. The fallout from a crash would be even greater if a lot of investors borrowed to increase their cryptocurrency holdings, or used their cryptocurrency holdings as collateral for loans. At that point, said Princeton University economist Markus Brunnermeier, “many people would lose a whole lot of money, and they might question the whole system. Why didn’t anybody protect them?”

Cryptocurrencies and the paper wealth they have created probably don’t amount to much of a risk for financial markets or the economy now. That doesn’t mean they might not later.

Write to Justin Lahart at justin.lahart@wsj.com