Joblessness Is Soaring. Why Are Stocks Rising?

Investors knew it was coming: The April nonfarm payrolls report was the worst on record, reflecting job losses claimed by the coronavirus pandemic that are already more than twice as many as during the entire Great Recession. Anticipating the numbers and bracing for their building economic impact, however, are two separate things.

On Friday, stock investors looked past the stark headlines of 20.5 million jobs lost in April and a 14.7% unemployment rate. 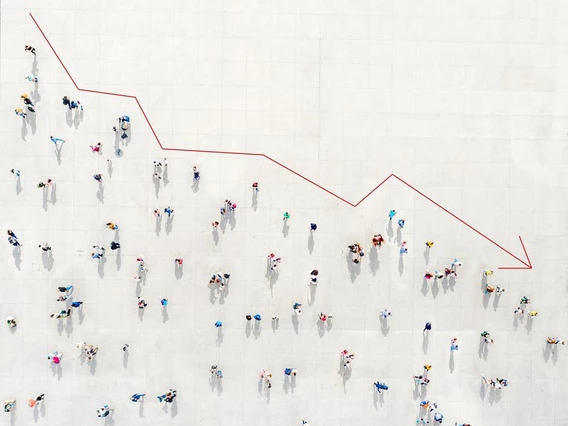 The broad S&P 500 gained 1.7% to 2929.80 on investors’ hope that an economic rebound will be swift and that most of the jobs lost will be recovered.

It makes sense that investors would underestimate the extent of the damage underway. Massive fiscal and monetary stimulus efforts have helped cushion the blow, and the Federal Reserve has promised to continue doing whatever necessary to support distressed areas of the financial markets.

That is helping to draw in even more money as global investors flock to U.S. assets that are viewed as protected by the Fed.

Still, the economic reality is much worse than the jobs numbers suggest. That’s in part because of the unusual nature of this recession, one that’s been induced within the span of roughly a month to stem a public health crisis. It’s also because of how government statisticians calculate the employment figures. At least one in five Americans is out of work, but you wouldn’t know that from the headline unemployment rate, which, at 14.7%, is propped up by a steep drop in labor-force participation, as millions of the newly unemployed can’t exactly search for a new job amid lockdown restrictions. It also doesn’t include those who are now involuntarily working part-time. What’s more, many of those still working have had their hours drastically reduced as businesses operate in restricted ways.

Weekly hours worked dropped 0.6% in April from a year earlier—what Oxford Economics says is equivalent to an additional 750,000 jobs lost. 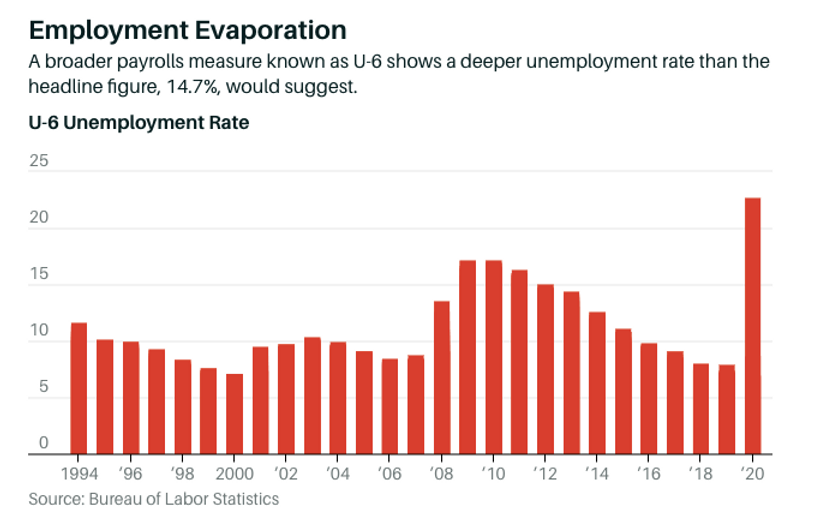 That more than three-quarters of job losses so far are classified as temporary also helps explain the optimism around a swift snapback as quarantines around the country are lifted.

But there’s optimism, and then there’s wishful thinking. The longer the pandemic persists, the harder it is for businesses to survive and rehire, and the less likely it is for consumers to be willing and able to spend in the way the economy needs to recover.

“We know there will be significant damage, because of lockdowns and also because of fear, and markets are not capturing the massive loss of income,” Daco says. The market, he adds, is not only underappreciating the depth of the labor-market damage, but it’s also underestimating the duration of the global recession.

The market isn’t the economy, and it has never been more true. While investors have been enjoying a rally that has seen the Nasdaq Composite Index erase all its losses on the year, the crisis so far has been disproportionately hurting lower-income workers, leaving 35% of the lowest earners unemployed, according to economists at the Federal Reserve and University of Chicago.

Lower-wage earners are key consumers, and at some point, there has to be a reckoning for the markets. The workers who are likely to be the most exposed to this shock—those in inflexible occupations within exposed industries—are precisely those with the highest estimated marginal propensities to consume, meaning their consumption rises as their income does, says Kate Bahn, economist at the Washington Center for Equitable Growth, a left-leaning think tank.

And the difference across income groups is substantial; workers who have so far borne the brunt of the layoffs have marginal propensities to consume that are about double those of workers in industries that have so far been less directly affected, Bahn says. 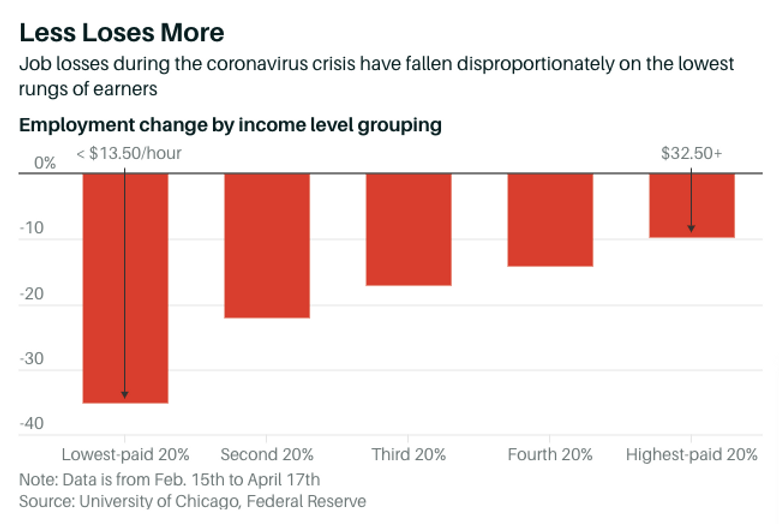 While the job hit has been concentrated in the leisure and hospitality industries, it’s not sparing higher-wage earners. Employment across the top quintile of earners has fallen 9%, and the bankruptcy filing this past week by luxury department store Neiman Marcus highlights the broad implications across the economy.

Though investors have gotten used to once-unthinkable estimates for contractions in gross domestic product, Daco says the growing hit to household income from mounting and prolonged unemployment is still underappreciated. He sees income down 10% in the first half of 2020, and already there are signs that consumers began socking away savings and spending on little beyond essentials before lockdowns began in earnest.

As job losses peak and parts of the country reopen, investors should watch the share of layoffs that are classified as temporary and the labor-force participation rate for clues to how a labor-market recovery is taking hold. Consumers’ willingness to resume normalcy and businesses’ ability to rehire are tethered, with sentiment and spending key to how businesses will fare and businesses’ success—especially that of small ones—key to workers’ prospects. So-called business births and deaths tracked by the Labor Department will also help show just how many employers have made it through.

If more layoffs flip from temporary to permanent, more hours are slashed, and workers face challenges in finding a new job, then investors will need to rethink current stock-market prices. After all, not even the central bank can fully make up for the goods and services consumers can’t or won’t buy, and the revenue and earnings companies won’t be generating.

Write to Lisa Beilfuss at lisa.beilfuss@barrons.com