The American economy roared into midsummer with a strong gain in hiring, overcoming trouble in matching workers with openings, as the recovery appeared to take firmer hold. 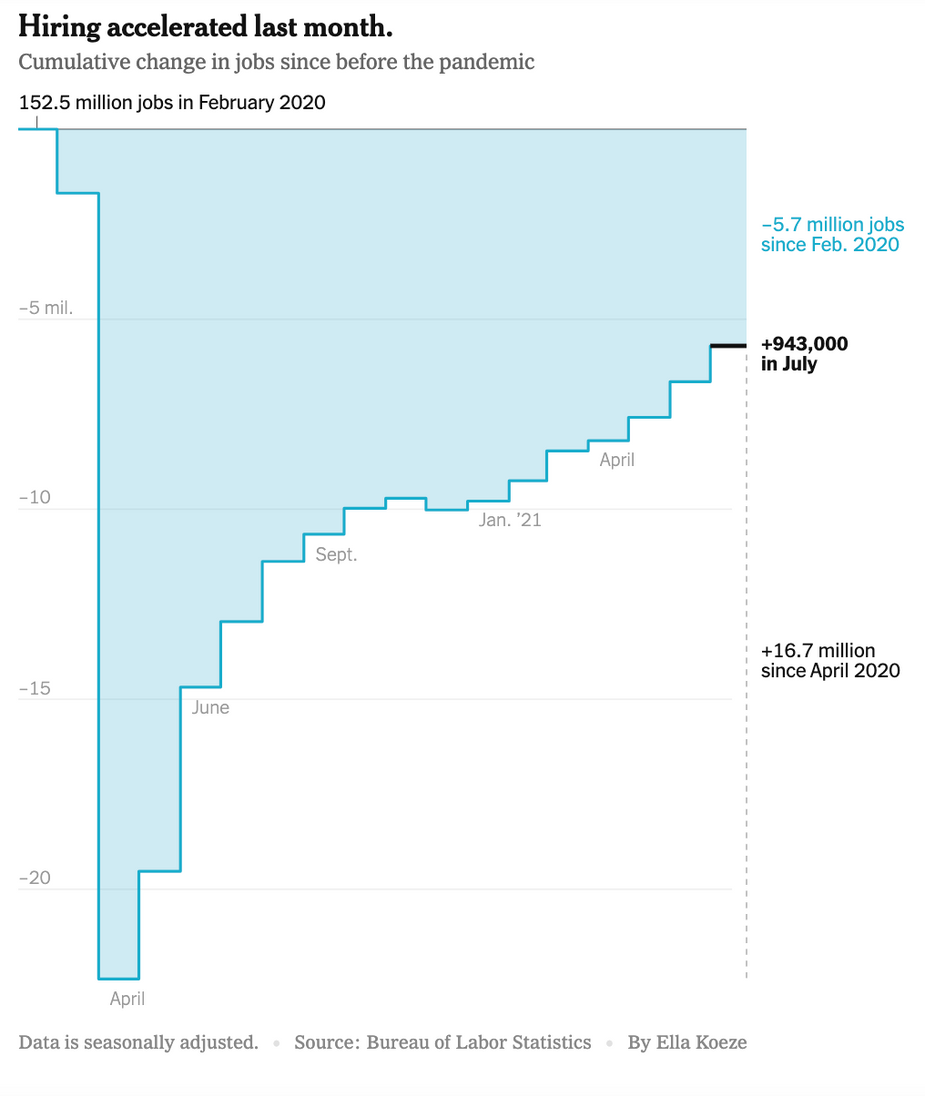 Employers added 943,000 jobs in July, the Labor Department reported Friday, with restaurants and bars leading the way. It was the best monthly performance in nearly a year, and it was accompanied by a sharp drop in the unemployment rate to 5.4 percent, the lowest since the pandemic began, from 5.9 percent.

One cloud loomed over the buoyant numbers: The data was collected in the first half of last month, before the Delta variant of the coronavirus exploded in many parts of the country. Experts warn that a sustained outbreak could pose a threat to industries just regaining their footing. 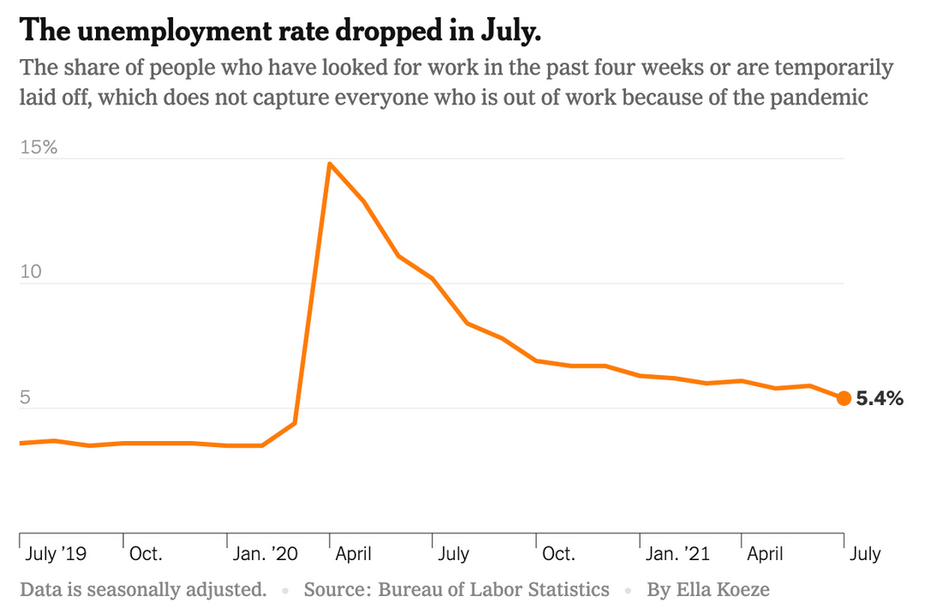 Nevertheless, after sizable jumps in employment in May and June, July’s showing reinforced the case that the recovery is proceeding, helped by healthy consumer spending, trillions of dollars in government support and a pickup in business investment.

For the Federal Reserve, July’s data is likely to increase confidence that the economy is on a solid track.

The Fed has held interest rates near zero since March 2020 and is buying up bonds each month, policies meant to keep near-term and longer-term interest rates low and fuel borrowing and spending. The job gains will give the central bank more confidence that the economy is doing well, keeping it on track to announce a plan to slow bond-buying in the coming months.

In remarks delivered from the White House, President Biden hailed the report as a reflection that his policies, too, were having a crucial impact, including efforts to encourage workers to get coronavirus vaccinations.

“Doubtlessly we’ll have ups and downs along the way as we continue to battle the Delta surge of Covid,” Mr. Biden said. “What is indisputable now is this: The Biden plan is working, the Biden plan produces results, and the Biden plan is moving the country forward.” 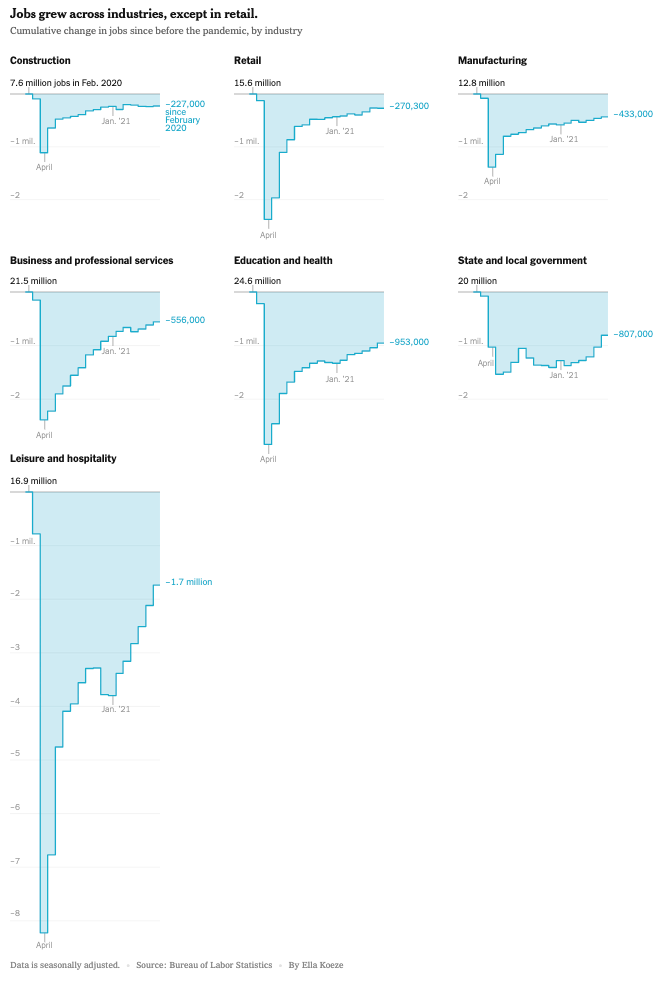 With upward revisions of the figures for May and June, nearly 2.5 million jobs have been added in the last three months, putting the economy three-quarters of the way toward restoring the 22.4 million positions wiped out at the pandemic’s start.

“Business is unbelievable,” said Tom Gimbel, chief executive of LaSalle Network, a recruiting and staffing firm in Chicago. “It shows me that companies are very optimistic.”

Leisure and hospitality businesses, which were devastated last year as bars and restaurants closed, were the biggest contributors to July’s hiring, adding 380,000 to their payrolls. That included 253,000 positions in food and drinking establishments, along with jobs in lodging and in arts, entertainment and recreation.

Unusually for a summer month, July also produced a substantial increase in education jobs. Instead of letting teachers go as they had in the past, schools kept more workers on the payroll, elevating the seasonally adjusted numbers.

Local governments added 221,000 education jobs, after a jump in June, and private institutions tacked on 40,000.

Manufacturing and construction showed more modest increases, hampered by higher prices for goods and a shortage of components like semiconductors. Retail jobs declined slightly after two months of big gains. But employment in professional and business services jumped by 60,000, a sign that the white-collar sector is on the upswing.

“Companies are continuing to hire salespeople in numbers that I’ve never seen,” said Mr. Gimbel of LaSalle Network. “The huge demand is entry to midlevel, with salaries ranging from $45,000 to $90,000. It’s the rebirth of the middle manager.”

For much of the year, companies have reported challenges in filling openings as they tried to keep up with consumer demand and rebuild their staffs — an anomaly in a labor market still far from full employment.

“You have to make twice as many calls to find candidates,” said Carmen Smith, chief people officer at Coyote Logistics, a Chicago subsidiary of UPS. “The talent market is very tight.” 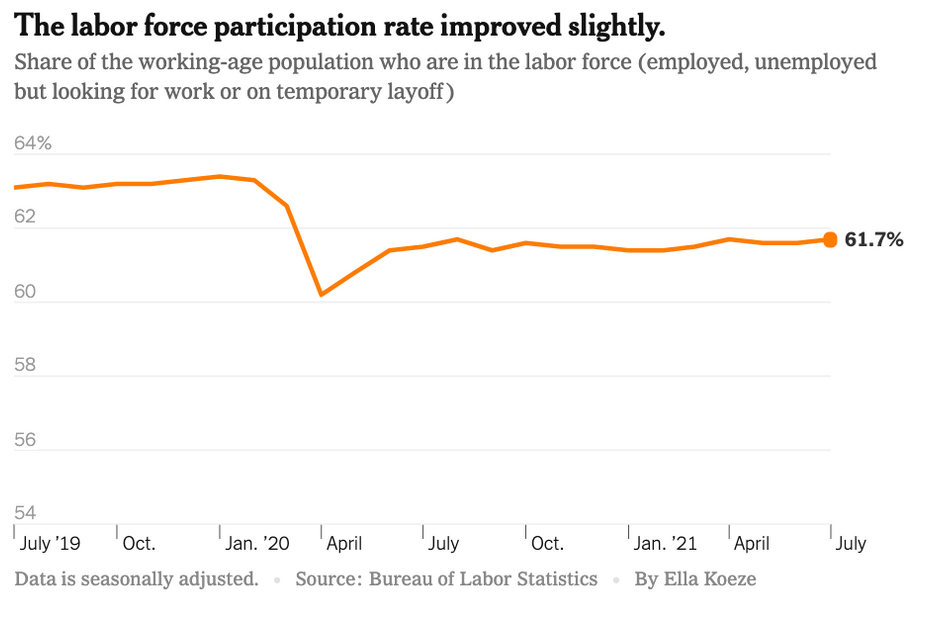 The July report, however, offered signs that some workers are coming off the sidelines.

Among those in their prime working-age years, which are defined as 25 to 54, the labor participation rate — those working or seeking work — rose to 81.8 percent from 81.7 percent. The Fed is hoping to see that figure climb back toward its February 2020 level, which was 82.9 percent.

Ms. Smith said Coyote brought aboard 100 new employees in July and plans to add 300 later this year, primarily in sales, operations, marketing, and finance. “We’re going into our busiest season, and business looks strong,” she added. 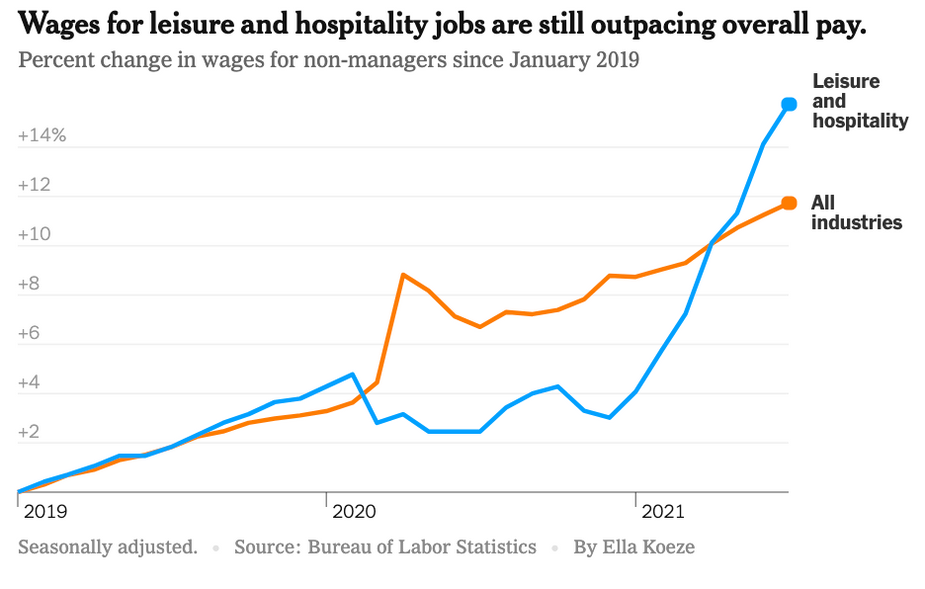 One factor in the nation’s hiring upturn may be more attractive wages. Average hourly earnings rose 4 percent in July from a year earlier, and wages for nonsupervisory and production workers — which can give a clearer reading on what’s happening for typical workers — have climbed 4.7 percent over the past year.

Those figures have been skewed by who has and hasn’t returned to the job market, but they are pointed in the right direction, from the Fed’s perspective.

At the same time, there is a contentious debate about whether the safety net erected to get jobless workers through the pandemic may now be keeping them out of the labor market. Twenty-six states, all but one led by Republicans, have moved to end a $300-a-week federal unemployment benefit supplement before it expires in September.

There is little evidence in the data available so far that the cutoff has significantly expanded the pool of job candidates. But Salman Chaudhry, general manager of five vacation lodgings in Ocean Springs, Miss., said the early elimination of the federal supplement in his state in June, as well as higher wages, had enticed job seekers.

“Our number of applications have gotten up,” he said. “We have found more people who are willing to work now.”

For Mr. Chaudhry and other business owners, the biggest wild card is now the Delta variant. “We’ll wait and see what Delta does to our business, but as of right now we still haven’t seen the effects,” Mr. Chaudhry said. “We’ve had some cancellations, but not at the level when Covid first hit.”

Nationwide, hotel occupancy seems to have dipped slightly in recent weeks, according to STR, an industry analytics firm. And Chase card spending in some travel and entertainment categories has fallen, Jesse Edgerton and Peter B. McCrory, economists for J.P. Morgan, wrote on Friday.

“Most notably, airline spending has fallen almost 20 percent from a recent peak in mid-July, a larger decline than during the severe winter Covid wave,” the economists wrote. “By contrast, restaurant spending has softened only modestly and thus far much less than in the winter wave.”

There is turbulence on the horizon. Events including the New York International Auto Show, which was to have opened later this month in Manhattan, have recently been canceled. Mask requirements have been reintroduced indoors in many areas as well.

Should restrictions on dining return, or schools close again, these sectors would be hard hit. A downturn in travel hiring is likely, too, should cases spike further.

“If Delta becomes a concern, it will likely constrain spending and activity and potentially hiring in all of the same service sectors,” said Mr. Gapen, the Barclays economist. “It does present some downside risk.”

Profit returned to prepandemic levels at Poor Boy Lloyd’s restaurant in Baton Rouge, La., as downtown offices filled up again after a year of remote work, the owner, Fred Taylor, said. In fact, Mr. Taylor had trouble keeping up with the resurgence in customers while being short staffed.

But in the last week, he said, he had lost nearly 75 percent of his usual sales as Delta variant cases multiplied in the area.

Uncertainty about the course of the virus is making it hard to know how much to invest in hiring and training more workers, Mr. Taylor said.