People Don’t Save Enough for Emergencies, But There Are Ways to Fix That

When it comes to saving for emergencies, the evidence is clear: People want to do it. They just don’t follow through.
A survey by the AARP Public Policy Institute, for instance, found that 71% of workers would likely contribute to an emergency-savings fund if their employer offered one, and 87% would do so if their employer made matching contributions.
And yet, according to a 2019 study by the Federal Reserve, roughly four in 10 people wouldn’t be able to come up with $400 in a financial emergency. If they do have an unexpected expense, they have to rely on costly measures, such as taking out a payday loan or borrowing on a credit card. 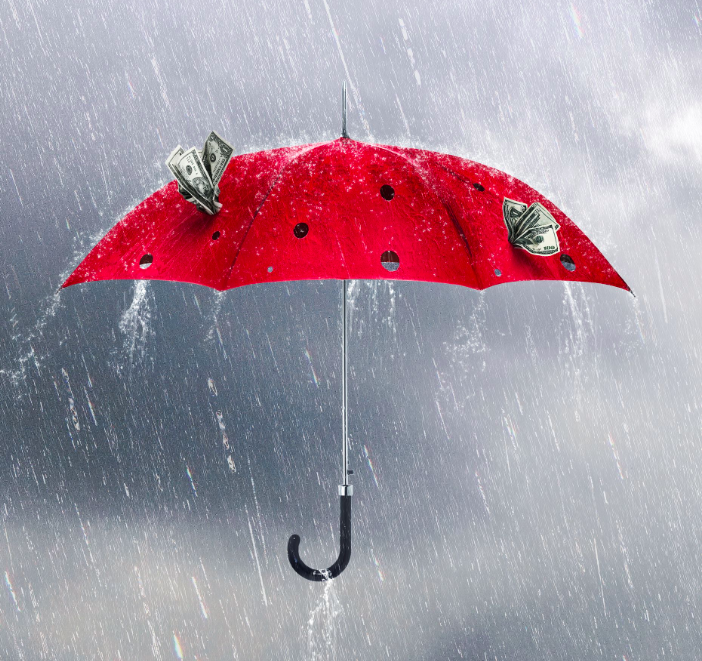 What are the psychological barriers that explain this huge gap between intentions and actual saving behavior? And how can companies and governments use our knowledge of these barriers to help people better save for emergencies?

To answer these questions, we first need to understand mental accounting—the psychological processes that people use to evaluate their spending and saving decisions. Only then can we design nudges that make it easy for workers to budget for those unexpected, yet inevitable, financial emergencies.

Recent research I conducted with Hal Hershfield of the University of California, Los Angeles and Stephen Shu at the City, University of London, showed that people were four times as likely to start saving when asked if they wanted to save $5 a day versus those asked to save $150 a month. While saving the large monthly amount feels like an unaffordable barrier, the small daily amount feels like an opportunity, even though they are actually equivalent amounts.

Saving a large monthly sum often feels like an unaffordable barrier, while saving small daily amounts feels like an opportunity, even if the sums are actually equivalent. JUSTIN METZ

Another bit of mental accounting to consider: People find it easier to let go of small amounts when it’s coming out of money that feels like a windfall. More than half a century ago, a study by Michael Landsberger looked at the impact of German restitution payments on the household budgets of Israelis. He showed that people given small to moderate windfalls actually increased their spending by more than the total amount received. More recent research showed that consumers given a $10 coupon at an online grocery store spent the windfalls on items they wouldn’t otherwise buy. Easy come, easy go.
Finally, there’s the question of inertia, the very human tendency not to take action. Even small obstacles become daunting barriers to saving, which prevent us from following up on our good intentions.

The good news is that many people will begin saving if it both takes our psychological barriers into account and involves minimal effort. This helps explain why automatically enrolling employees into workplace retirement plans is so effective, boosting plan participation from about 70% to roughly 90%. Survey data suggest that employees appreciate the arrangement, as 97% of workers whose companies use automatic enrollment say they are glad their companies do it. 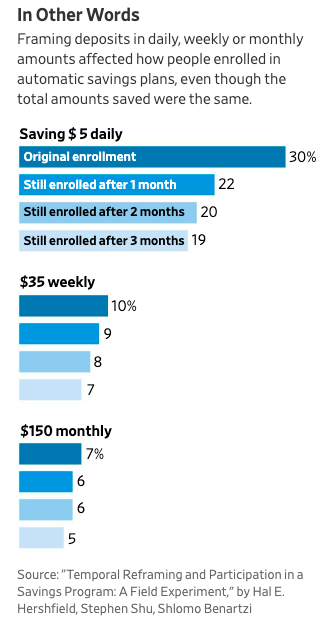 Auto-enrollment also would maximize participation in emergency-savings accounts. However, if auto-enrollment isn’t possible, either for regulatory reasons or because the employer doesn’t think it’s suitable, then employers should consider other options in the behavioral-economics toolbox.

For instance, employers could use what’s known as the “active choice” nudge—requiring workers to choose whether or not to enroll. (They can’t choose not to choose, which is what usually happens with inertia.) Research by Gabriel Carroll, James Choi, David Laibson, Brigitte Madrian and Andrew Metrick showed that such an approach boosted participation in a retirement savings plan by 28 percentage points compared with the traditional opt-in approach. By compelling people to choose, and thus act on their preferences, we can help them overcome their inertia.

To make it more likely that employees will save for emergencies, employers also need to identify sources of income that feel like windfalls. Among these sources:

While these windfall savings could be part of an auto-enrollment process, current state wage-garnishment laws might require explicit consent. Thus, until the government provides legal clarity, emergency-savings accounts should be offered to workers on an opt-in basis. Nevertheless, employers can still strive to minimize inertia by making the sign-up process as simple and fast as possible, and by using nudges like active choice. 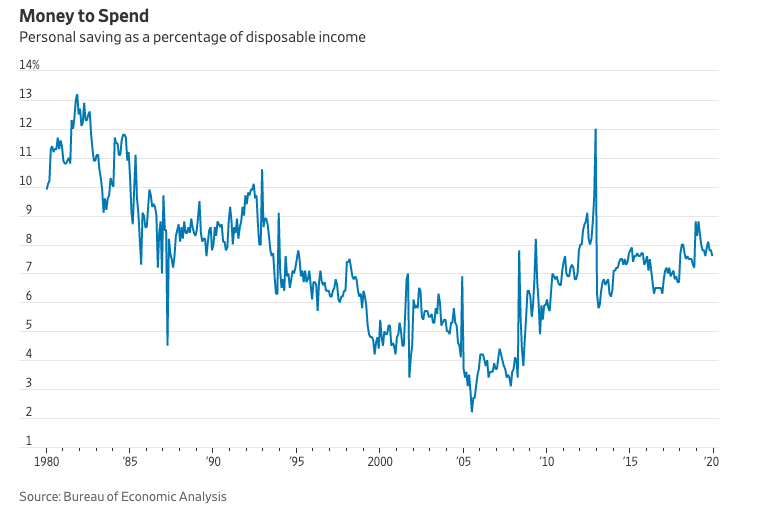 Another potential solution would be to use the employer match for retirement accounts to fund emergency accounts—the match feels like a windfall—but the current regulatory environment makes that unfeasible. As noted in a recent paper by John Beshears, James Choi, Mark Iwry, David John, David Laibson, and Brigitte Madrian, integrating emergency savings into current retirement products could simplify the savings process for workers, but is unlikely to occur without additional action from lawmakers.

Of course, from time to time, employees might need to dip into their emergency account. In fact, 60% of households in one survey from the Pew Charitable Trusts experienced a financial shock—defined as a significant loss of income or a major expense—in the previous 12 months. A third of households experienced two or more shocks. In these cases, as soon as funds are withdrawn from the emergency account, the next windfall—be it a bonus, a 13th paycheck, or the next pay raise—would automatically be reallocated to refill the account.

Some might argue that this nudging system merely reshuffles savings, shifting funds from retirement to an emergency account. While that’s not necessarily a bad outcome, there are several reasons to believe these proposed changes could result in higher savings overall.
The first reason is that it reduces the risk that people will take on unusually expensive debt in the aftermath of a financial shock, thus diminishing their future savings potential.

The second reason involves the so-called partitioning effect. Research by Dilip Soman of the University of Toronto and Amar Cheema at the University of Virginia shows that giving people two savings accounts can lead to greater overall contributions, as they feel compelled to contribute to both accounts. For instance, when the researchers gave low-income households in India two envelopes in which to deposit their savings, they saved nearly twice as much as those given just a single envelope. Similarly, employees might keep saving for retirement, yet add more savings for emergencies when they get a pay raise.

The third reason is due to the negative impact of money worries on our decision-making. Research by Anandi Mani, Sendil Mullainathan, Eldar Shafir, and Jiaying Zhao has shown that the stress of poverty makes it harder for people to plan ahead and exert self-control, as it consumes scarce mental resources. The scientists estimate that the cognitive cost of poverty is roughly equivalent to functioning after pulling an all-nighter. By having a financial cushion, people might be able to make better financial decisions, including saving more for their future.

Finally, financial stress can also affect job performance, thus hindering the future earnings potential of workers. One recent study showed that truck drivers who are more anxious about their finances are also more likely to get into preventable accidents, presumably because they are so worried that they’re less focused on driving.

One of the practical challenges with establishing an emergency-savings system is that an increasing number of workers are finding jobs in the gig economy, which requires a very different savings mechanism for emergencies.

These workers don’t have a traditional employer that would sponsor an emergency-savings account. They also lack a predictable paycheck. So these mental-accounting nudges need to be adjusted to fit this new breed of worker.

To help these workers, gig-economy platforms could identify various forms of windfall income and make it easy to automatically save those for emergencies. For example, a delivery worker for Grubhub or a driver for Uber can be offered to save their tips. Similarly, the handyman on TaskRabbit could be offered to automatically save in those months with a higher volume of work. 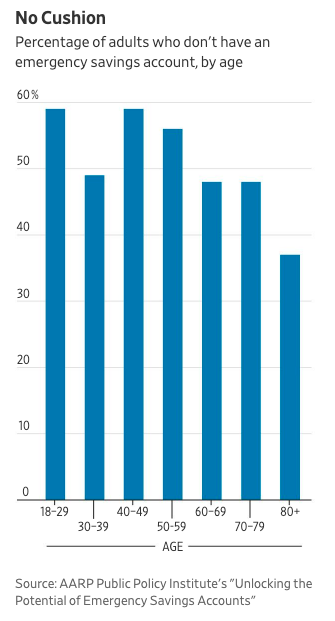 Although current regulations prevent gig-economy platforms from automatically signing up individuals for emergency-savings accounts, they can still offer active choice. When individuals sign up to do a gig-economy job, the app can require that they choose whether or not to automatically initiate an emergency-savings account using tips or other forms of windfall income. Once they have signed up, they’re on autopilot for financial security.

Finally, if a gig-economy platform doesn’t offer any opportunities to save for a rainy day, financial institutions and financial-technology firms could use a save-the-change approach, in which debit-card transactions are rounded up and the “change” is deposited into an emergency savings account. For example, a $2.50 charge at Starbucks would be rounded up to $3, with the extra 50 cents reserved for a rainy day. Although the change isn’t a windfall, it is similarly easy to let go of, since it feels like such a small amount. Over time, it could easily grow into a useful emergency account.

The larger lesson is that solutions for the emergency-savings crisis exist, at least for most forms of employment. By implementing these nudges at scale, we can improve the financial well-being of workers.

We might even make the roads a little safer.

Dr. Benartzi (@shlomobenartzi), is a professor and co-head of the behavioral decision-making group at UCLA Anderson School of Management and a frequent contributor to Journal Reports. Email him at reports@wsj.com.