September Outlook: How About Some Volatility? Pre-Election Strains Could Start Showing 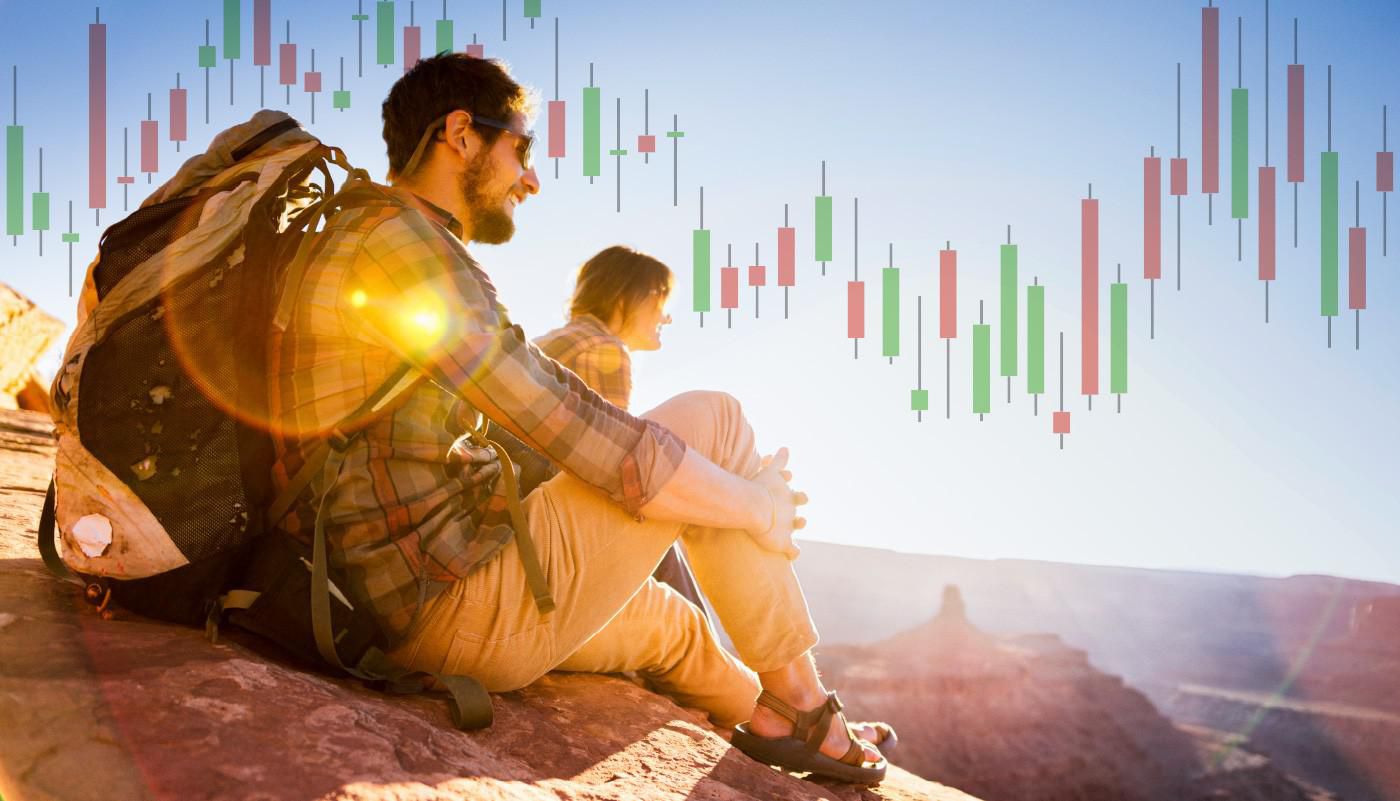 What can September deliver for an encore after August’s fireworks included new all-time highs, a blistering Tech rally, and a surprising return of stock splits?

Well, for one thing, how about a little volatility?

That isn’t just idle speculation. Not to rain on anyone’s parade, but Cboe volatility futures point steadily upward throughout September. Higher volatility historically correlates with pressure on stocks, though there’s no way to predict exactly how it might shape out this time.

The possibility of a volatility surge isn’t the only thing making some people nervous as the new month approaches. A couple of other variables don’t appear to point the way you’d expect, considering major indices are up in the stratosphere.

This doesn’t mean the rally train can’t keep chugging along, and there are plenty of positives out there, too, including the recent Apple AAPL (AAPL) and Tesla TSLA (TSLA) stock splits that appeared to add new strength to the rally as August wrapped up and a reshuffling of the Dow Jones Industrial Average ($DJI) that added Honeywell (HON), Amgen AMGN (AMGN) and Salesforce CRM (CRM) to the landmark index.

It only means that it could be helpful to pull your eyes momentarily away from the dizzying Tech rally and take stock of what else is happening. Summer dreams can sometimes get ripped at the seams, as the old song reminds us.

Here are two numbers to consider pondering as August wraps up and the cool breezes of fall hopefully provide welcome refreshment: 27 and 0.64%.

Twenty-seven isn’t just the age when many stars of the classic rock era died. It’s also the market’s current estimate of where the Cboe Volatility Index (VIX) will be trading in mid-September, based on the VIX futures (/VX) market.

As of late August, the index was at 22.6—down considerably from the March 2020 highs above 80, but still above historic averages near 20.

As the Cboe itself said on its site, “VIX futures are in contango through October … in part because of the possibility of higher expected volatility in the weeks around the U.S. election on Nov. 3.” Contango is when prices further out on the futures spectrum are priced higher than the spot price. 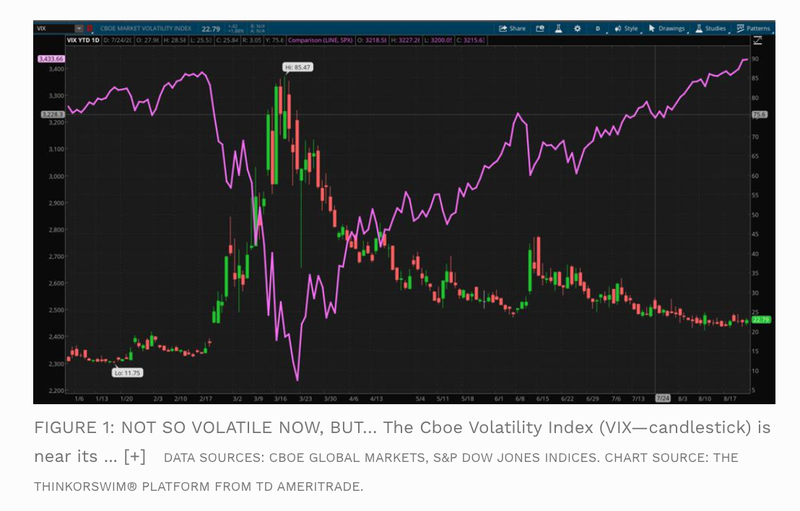 While higher volatility doesn’t necessarily mean stocks coming under pressure, it does possibly indicate a tougher road ahead with bigger peaks and valleys. Anyone trading in September should keep that in mind, along with “quadruple witching” on Friday, Sept. 18. That’s when stock index futures, stock index options, stock options, and single stock futures expire simultaneously, and can often cause elevated volume and sometimes choppy trading.

The approaching election is almost certainly going to be a bigger element on Wall Street as September continues, accounting for some of the volatility—as the VIX futures market has priced in. Though October is probably going to be when tensions really start to peak, having such an important date hanging out on the calendar less than two months away can’t be discounted as a possible force.

Analysts are all over the place about which sectors might go where depending on the polls, so you’re welcome to read all those reports as the month continues. We’re not going to speculate beyond the general historical tendencies. What does seem likely is if the election appears close, things might get more frenzied—and stocks might come under pressure—as people start to worry about the chance of some sort of Bush-Gore 2000 repeat. If there’s one thing markets truly hate, it’s uncertainty.

The other number, 0.64%, also can tell you more about the overall market than just looking at the latest jump in Apple (AAPL) or Tesla (TSLA). That’s where the 10-year Treasury yield stood as of the start of the last full week of August. It’s basically spent the last four months hibernating between 0.6% and 0.7%, only waking up to take quick steps above and below that before retreating back to its comfort zone. It flirted with 0.7% as August came to a close, though it’s unclear if that move can last.

Typically, if people are bidding stocks higher, that tells you they’re optimistic about the economy. Stronger equities often get accompanied by weaker Treasury prices (which move the opposite direction of yields), because fixed-income tends to attract more buyers in times of worry and restraint.

This time, weirdly enough, Treasuries and stocks are at or near all-time highs. This might reflect a little reluctance by many investors to rotate more heavily into stocks considering the economic recession and virus fears. Maybe people are shifting the deck a little within their equity portfolios, but not from fixed income into equities. This kind of caution could suggest the stock market rally isn’t completely unchained.

The Fed might have added pressure on yields in August when minutes from its July meeting indicated heavy concern about the continuing economic impact of COVID-19. Another Fed meeting is right around the corner Sept. 15-16. The last one, in July, didn’t really have a huge impact on the market, with the Fed in a long-term holding pattern on rates. The same could be true this time, with maybe even more reluctance by Fed leaders to say much that might rock the boat with the election just six weeks out.

A third variable entering the new month is that as of late August, things remained extremely cloudy in Washington, D.C. Senators were on vacation and the House was dealing with postal issues. No one, it seems, was completely focused on fiscal stimulus, a matter where we have an impasse. Meanwhile, many people beyond the Beltway (including on Wall Street and at many businesses) could be wondering how workers, smaller companies, the transport industry, landlords, and many others can get along if there’s no more help from Washington.

By the end of September, most of the initial stimulus money will be drying up, which is very concerning for some hard-hit industries like airlines. If the government doesn’t provide assistance, it could be tough for these and other companies to keep payroll going into October. More layoffs could take place, and all this could start showing up in weaker data down the road.

Many people only had benefits from the stimulus through the end of July, meaning August retail sales, housing data, and other economic metrics due in September might start reflecting weakness even if Congress strikes a late deal. Initial weekly unemployment claims showed an unexpected bump in mid-August, opening up some worries about how August payrolls might look when that report hits the tape in early September.

That’s the negative side. It’s also possible that both parties, seeing the election right ahead in the windshield, might compromise on a bill to put money back in consumers’ pockets before they head to the polls. A new stimulus deal might be the kind of catalyst the market needs to add on to recent gains. September could tell the story, because it’s unlikely Congress would get much of any significance done in the closing weeks before Nov. 3.

September could also bring news of initial vaccine trial progress. A lot of the market’s rally seems based on ideas that a vaccine could be around the corner and things can go back to normal. That said, the vaccine is a “show-me” situation, and when investors expect a fastball, they often get a curve. Meaning there’s always the chance that data might be delayed or not as positive as many had hoped. Maybe we’re getting ahead of ourselves because it’s still very early in the trial process as companies continue to seek volunteers.

September isn’t a month with much in the way of earnings, though we do expect to hear from Oracle ORCL (ORCL) Kroger KR (KR), FedEx FDX (FDX), Nike NKE (NKE), and Macy’s M (M). With earnings scattered and thin, even if volume starts to build—as it typically does from a seasonal perspective—the month could see stocks more prone to trading on geopolitical and virus headlines.

When the cat’s away, the mice will play, meaning that without earnings input, those day-by-day and even minute-by-minute news developments might distract investors more than if they had major corporate updates to focus on. Hopes for some progress on trade with China lit up in mid-August, so we’ll see where that goes.

Here’s another question for September: Can the market continue this trend where the “mega-caps” like Microsoft MSFT (MSFT), AAPL, TSLA, and the FAANGs prop up major indices to record highs despite lack of participation from other key sectors like Financials and Industrials? If the market feels top-heavy right now, that’s because it is. Tech makes up more than 20% of the SPX SPXC ’s value.

On one wild day for the S&P 500 Index (SPX) in late August, the SPX posted new record highs even while the majority of stocks in the index lost ground. It’s possible this kind of trading could continue for a while, mainly because piling into mega-caps is the strategy that’s paid off for so many since April. It’s possible investors and portfolio managers will keep doing this until it stops working.

However, history indicates that trends like these usually end at some point, and September doesn’t promise the same torrid mix of earnings and stock-split excitement we just had. As the old trading floor expression goes, the cure for high prices is high prices.