Should Retirees Pay Off Their Mortgage or Invest the Money? It Depends on the Math

These days, if you want to pay off your mortgage when you retire, you’re going to take a lot of flak. 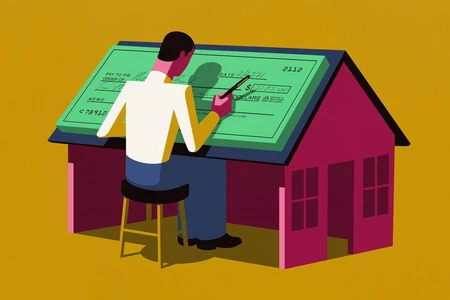 That is because mortgage rates are currently at whistle-inspiring lows—the average rate across 30-year fixed loans in December was 2.93%, according to mortgage technology provider ICE Mortgage Technology. If you itemize and get tax a deduction for mortgage interest, you’re paying even less to borrow money.

Meanwhile, if you were to invest the money instead of paying off the note, you’re likely to make a lot more. Over the last 10 years, portfolios invested 60% in stocks and 40% in bonds averaged roughly a 10% annualized return, according to investment research platform Morningstar Direct. On its face, paying off a low-cost loan when you could use that payoff money to grab a higher yield on an investment means leaving money on the table that could be useful in retirement. Once money is sunk into a house, it is illiquid, which can reduce your options if you face unexpected expenses.

Andrew Graham, managing partner of Jackson Square Capital in San Francisco and a J.P. Morgan veteran, is “generally in favor of keeping a mortgage of up to the tax-deductibility limit of $750,000 in retirement,” he said. Even for the risk-averse, he said, it is still fairly easy to put together a low-risk portfolio that can outdo the savings most clients would get from paying off a loan.

But no portfolio can match the no-risk proposition of retiring debt and with it, any anxiety over covering mortgage payments. Here’s what financial advisers say you need to do before you cut any big checks:

Determine what you actually pay to borrow money. If you take the standard deduction, your mortgage rate is your real and final rate. If you itemize, use a mortgage tax-deduction calculator to get your mortgage rate after taxes. This is a good one:

https://www.aarp.org/money/credit-loans-debt/mortgage_tax_calculator. Don’t forget that upon retirement, there will likely be changes to your tax return; for instance, you may no longer be taking business deductions, so you may switch from itemizing to taking standard deductions. Make sure you calculate appropriately.

Run scenarios, either with a financial adviser or on your own, for how a lump sum amount to pay off your mortgage could perform in various portfolios. Subtract capital-gains taxes and fees to manage the money (many advisers charge 1%) based on the length of time you expect to hold the investment. Those models will show you the range of returns that that money could yield over a fixed period. Be pessimistic. Model worst-case scenarios and the most conservative investment strategies.

In doing so, you will likely notice that a fixed-income portfolio today yields a pittance. Using an aggregate bond ETF as a proxy for a conservative bond portfolio, Morningstar Direct said the current 12-month yield, after expenses, is 2.16%. Though mortgage rates do not follow bond rates in lockstep, they are influenced by them. To put it simply, when money is cheap, it hard to earn a lot of income from lending, which is what buying bonds is.

One proponent of paying off a mortgage in some cases is Nicole Webb, who runs the New York office of Wealth Enhancement Group, based in Minneapolis. She said that in the 2008 financial crisis, her retiree clients without mortgages fared better because they didn’t need to withdraw as much money from their declining portfolios. That experience has made Ms. Webb wary of some retirees carrying mortgages, especially when they must expose themselves to stock market risk to meet income goals.

“For someone over the age of 72, would it be appropriate for them to be chasing a rate of return?” Ms. Webb asked.

If your investment returns have convinced you a mortgage isn’t such a bad thing, then stop here. However, if the risk you have to take for those returns makes you too nervous, make a plan to assemble the payoff amount.

Matt Hylland, a partner at Arnold and Mote Wealth Management in Cedar Rapids, Iowa, said the biggest problem his clients face is when they want to pay off a mortgage with a tax-deferred retirement account withdrawal.

Mr. Hylland recently worked with retired clients who bought a $300,000 house in November. Their initial plan was to withdraw the cash from their IRA and pay for it outright, but Mr. Hylland calculated that doing so would bump them from the 24% federal tax bracket to the 32% tax bracket. Loath to carry a mortgage well into retirement, the couple pivoted to the idea of taking out a 5/1 adjustable-rate mortgage, which would let them withdraw from the IRA over five years, reducing the tax hit. Mr. Hylland was in favor of the plan until they began to research mortgage rates, he said. In the wacky world of pandemic mortgages, they could get a better rate on a 30-year fixed than on an ARM.

The couple is currently sticking to their plan to pay off the loan in five years, Mr. Hylland said, though if they have an unexpected medical bill or other expenses, they can simply make the lower payment instead.

You’ll be reminded of what might have been every time there is a market high. Some people with paid-off mortgages are probably kicking themselves now that the Dow appears parked around 30,000. Focus instead on how good you’ll feel when there is a crash, a correction or just a wobble.

Write to Katy McLaughlin at katy.mclaughlin@wsj.com