Target-Date Funds Are Performing Well. But Choosing One Can Be Harder Than You Think.

Target-date funds aren’t sexy. They are, however, the workhorses of our retirement system, and over the past decade—from one crisis to the next—they have grown from a nascent category into the go-to savings option in 401(k)s, RRSPs, and other workplace retirement plans. And while sophisticated investors still may sniff at these funds-of-funds, most have held up far better than many portfolios in the exceptionally difficult first half of the year. 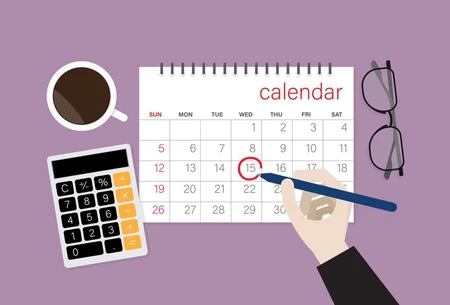 Target-date strategies were designed for less-engaged investors—people who need to save for retirement but aren’t inclined to choose funds, let alone design an asset allocation and monitor it over the years. Instead, they choose a fund for the year closest to when they plan to retire and let the fund company do the rest. These set-it-and-forget-it options have withstood this year’s market volatility remarkably well, and on the whole, have lived up to their promise.

That’s great news for American workers, who, as of the end of March, have $1.9 trillion in target-date strategies, including those investing in open-end mutual funds, exchange-traded funds, and collective investment trusts. That amount will continue to grow thanks to the Pension Protection Act of 2006, which allowed employers to automatically enroll employees in their retirement plans, with the most popular default option being target-date funds. At the end of 2008, target-date funds had $158 billion in assets.

“When the financial crisis hit, target-date funds were still in their adolescence, but now it’s a massive industry,” says David O’Meara, director of investments at Willis Towers Watson. “About half of new plan cash flows are going into target-date funds, and they’re much more widely held than in the crisis.”

And how have they done? “It could have been much worse,” O’Meara says. Consider the most jarring period, when U.S. stocks plunged 34% between Feb. 20 and March 23; target-date funds behaved well. The average 2020 target-date mutual fund tracked by Morningstar declined 10%. The average target fund with a 2060 vintage or longer fell 20.7%.

For six months, 2020 funds are still down 1.7% on average through June 26, but that’s far better than the typical balanced fund; those with 50% to 70% in stocks, according to Morningstar, are down more than 5% this year.

Granted, any decline at retirement age can have lasting implications, but that assumes retirees cash out when they hit the theoretical finish line. Most target-date investors didn’t. “The beauty of target-date funds is there is a high level of inertia,” says Kim DeDominicis, a portfolio manager with T. Rowe Price target-date strategies. “It forces investors to stay invested.”

For all of their apparent simplicity, target-date funds aren’t all that simple. Funds with the same retirement year can have very different allocations to stocks and bonds, and how managers execute on that top-down view also varies dramatically. “It’s understandable why they’re so popular, but we are not a fan,” says Ric Edelman, founder of Edelman Financial Engines.

Designing an entire portfolio around when someone hopes to retire “is a ridiculously simplistic approach to a complicated question,” he says. Also, “there is tremendous disparity in their construction and management, and that doesn’t even get into the issue of which stocks and bonds the fund manager buys out of the thousands that are available.”

Another sticking point: Most employer-sponsored retirement plans offer target-date funds from just one asset manager. This leaves participants with one lever for adjusting their portfolios—moving their target dates up or back to account for their circumstances.

Even so, target-date funds efficiently tackle the key factors for long-term returns: saving consistently, building a diversified portfolio, and keeping fees low. In fact, target-date funds represent the cheapest form of professional money management; the average total fee paid by investors in 2019 was 0.58%, according to Morningstar. Investors in Vanguard target-date funds pay between 0.12% and 0.15% for its “priciest” investor-class shares, and just 0.09% for institutional shares.

And Edelman allows that for investors who would otherwise go it alone, even a “mediocre” target-date fund is probably better than the alternative—provided investors understand some key differences and how to use them. “Lumping them together is like saying that all automatic-transmission cars are the same,” he says.

Differences in target-date design can have significant implications, as the first six months of this year have underscored. Among 2020 target-date funds—aimed at investors planning to retire this year—the percent of assets in stocks can vary dramatically. The T. Rowe Price Retirement 2020 fund (ticker: TRRBX) lost more than 14% of its value during the first quarter, due largely to its 55% allocation to stocks, versus

a 43% average allocation for its peers. Yet, that fund has returned an average of 8.4% a year over the past decade and sits at the top of its category.

Paths “To” and “Through”

A major point of differentiation between target-date funds is glide path, or how managers adjust allocations between stocks, bonds, and other assets over time. Target-date funds start with a higher allocation to stocks when the target date is decades away and gradually become more conservative, but this progression varies from one manager to the next.
Broadly speaking, target-date strategies fall into two categories. Some adjust their allocations “to” retirement, as is the case for BlackRock, American Century, and J.P. Morgan; while others adjust “through” retirement, as is the case for the target-date giants American Funds, Fidelity, T. Rowe Price, and Vanguard.

“For a young investor, the biggest risk is not the market; it’s losing their job. ”
— Nick Nefouse, BlackRock

These differences in glide path can translate into significant gaps in performance, particularly in the short term. “The thing that really stood out in the first quarter specifically was the difference from the ‘to’ versus ‘through’ glide paths and the levels of volatility,” says Morningstar strategist Jason Kephart. On average, he says, funds aimed at taking investors “to” 2020 have lower stock allocations, so they held up better as a group. The average 2020 “to” series lost 8.4% in the first quarter versus an average loss of 10.6% in the “through” series, according to Morningstar.

Yet, even within these camps there are many gray areas.

BlackRock LifePath funds, for example, start with a 99% allocation to stocks but steadily bring that down to about 40% as retirement approaches—and then keep that allocation through retirement. “For a young investor, the biggest risk is not the market; it’s losing their job,” says Nick Nefouse, co-head of BlackRock’s LifePath target-date fund franchise. “Not owning a lot of fixed income when you’re young allows you to use it more appropriately when you’re older.”

Vanguard starts with a 90% allocation to stocks and keeps it there until investors turn 40, at which point it glides down to 50% until the target retirement date. It continues reducing equity exposure for another seven years until it reaches 30% at age 72. “It’s usually not until the early 70s that you see spending from those accounts start to take place,” says Brian Miller, a senior product manager with Vanguard.

At Schwab, the equity allocation is 95% for people just starting to save for retirement, and drops to 40% at retirement. “We’ll continue to roll down the equity and the fixed-income mix for 20 years,” says Jake Gilliam, head of multiasset solutions at Charles Schwab Investment Management. “So if someone retires at 65, they’ll reach our equity landing point at age 85, and our final allocation is 25% equity and 75% fixed income.”

As is the case in individual portfolios, asset allocation is a major driver of returns, but looking beyond that, target-date managers all have their own playbooks for how they execute.

Some firms set their allocations and generally stick with them, revisiting them annually to make incremental adjustments for long-term changes in investor behavior or capital markets. Others make “tactical” adjustments to reflect near-term market conditions. For example, T. Rowe Price has a 91% strategic allocation to stocks in its 2060 portfolio and can overweight or underweight that allocation by up to five percentage points.

Yet another distinction is the underlying funds, namely whether they are passive or active. Not surprisingly, Vanguard favors the former. It builds its target-date funds with four or five broad-based strategies.

On the other side of the spectrum, American Funds is all about active management. Within its 2020 target-date fund, for example, there are 20 underlying active strategies, and within those, managers can adjust their holdings for market conditions and time horizon.

Were They On Target?

On average, 2020, 2030, and 2040 target-date funds did better than the S&P 500 and the typical balanced fund during the first half of this year but trailed the bond index. Over the long run, they’ve underperformed the S&P, but beat bonds and balanced funds. 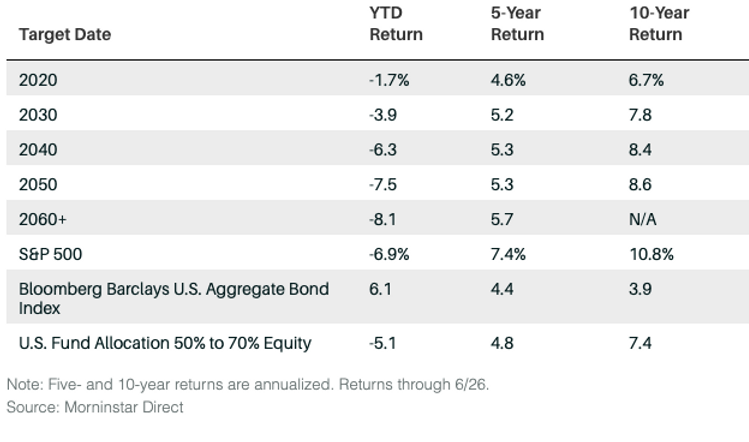