The $3.5 Trillion Budget Plan Could Make Inflation a Perpetual Problem

Just as the breakneck pace of inflation seemed to be slowing, U.S. lawmakers took steps that could ensure it’s the reprieve itself that is transitory.

It was almost easy to miss the $3.5 trillion budget resolution passed by the Senate at around 4 a.m. Wednesday, sandwiched, as it was, between the Senate’s passage of a $1 trillion bipartisan infrastructure package a day earlier and July’s cooler consumer-price index, which was released hours later.

The budget blueprint, however, has larger economic implications than either—and could elevate inflation from a temporary annoyance to a perpetual problem. 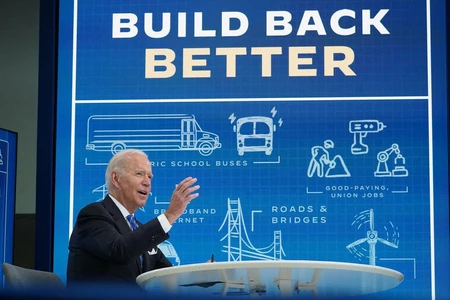 The new infrastructure spending bill, despite the dramatics of its passage, won’t impact the economy all that much. The Penn Wharton Budget Model projects the package—which would represent one of the biggest federal investments in roads, rails, and bridges in decades—will have no significant effect on gross domestic product over the next decade or in the long run, by which economists mean the year 2050.

That doesn’t mean the country doesn’t need it, and it doesn’t mean certain stocks won’t benefit, as industrials and green-energy companies look poised to profit. It’s just that the overall impact will be limited.

The infrastructure bill, however, has paved the way for a second spending package that would be anything but inconsequential.

Democrats have split the Biden administration’s spending priorities, with the second batch—including funding for pre-K, free community college, and public-housing investments—coming in the form of a reconciliation bill that strategists say is likely to pass later this year. In the wonky world of legislating, reconciliation is a way to fast-track bills relating to spending and taxes; it starts with a budget resolution and needs only a simple majority to pass the Senate.

The debate over the merits of the spending initiatives is one matter. An examination of the potential economic impacts of the spending is another. You have to go back to the 1960s to see such massive fiscal spending during an economic boom, says Barry Knapp, director of research at Ironsides Macroeconomics. Back then, the Federal Reserve moved away from its inflation mandate to emphasize full employment, and fiscal and monetary policies were simultaneously providing a boost to the economy.

“We have this setup now that is very similar to the 1960s, which led to the Great Inflation of the 1970s,” Knapp says. A repeat of the latter decade isn’t guaranteed, but it’s an analog that shouldn’t be dismissed, he says. Knapp, for his part, says a passage of President Joe Biden’s corporate tax plan—meant to pay for the new spending—would result in a 10% stock market correction.

The good news, depending on how you look at it: The reconciliation bill, and the taxes proposed to pay for it, are likely to get whittled down. Centrist Democrats in the Senate—Kyrsten Sinema of Arizona and Joe Manchin of West Virginia—have suggested they won’t support a $3.5 trillion package.

Andy Laperriere, head of U.S. policy research at Cornerstone Macro, sees something closer to $1.5 trillion, mostly paid for by increases in taxes, including a 25% corporate rate versus a proposed 28%, and a 28% capital-gains tax for millionaires, down from a proposed 39.6%. That’s the optimistic view. Joe LaVorgna, chief economist of the Americas at Natixis, falls in the temporary-inflation camp but says more substantial fiscal spending is the one risk to his forecast. He points to the so-called output gap—the difference between actual and potential GDP, and a metric economists use to predict the paths of inflation and Fed policy. The idea is that when the economy operates above its potential, prices have nowhere to go but up.

The Congressional Budget Office estimates that the output gap will be minus 0.5% this year, before ballooning to 2.4% in 2022. That would reflect the highest gap since 1973, when inflation was running well above 4%. That’s before taking Biden’s budget proposal into account.

“We’re already seeing it,” LaVorgna says, nodding to widespread labor and material shortages as companies struggle to meet customer demand. “All of this spending could make a transitory problem permanent.” He puts the probability of Biden’s budget going through as currently structured at a little better than a coin flip.

Put it all together, and some investors are starting to get jumpy. “Politicians are entitled to their agendas,” says Michael Shaoul, CEO of Marketfield Asset Management. “But from an economic perspective, it’s taking a risk of exacerbating what are already clear inflationary pressures.”

Shaoul expects inflation to find a floor well above 3%, higher than the Fed’s 2% target, and he is buying “price makers” like home builders, commodity extractors, and industrial companies versus “price takers” that have no choice but to pay higher prices that they can’t easily pass on to customers. That’s under the assumption inflation remains hot—especially as more fiscal spending enters the economy.

Looming large is whether—and when—inflation affects the Fed’s tapering and tightening timelines. More spending means more debt that the central bank may have to buy, further complicating monetary policy for central bankers eager to avoid upsetting markets. The more Treasury prints and longer the Fed deflects, the harder that is going to be.

Write to Lisa Beilfuss at lisa.beilfuss@barrons.com