What Fed Interest Rate Increases Mean for Your 2023 Financial Plans 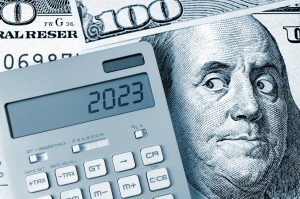 After a year of rising interest rates, higher prices and volatile markets, financial advisers say now is the time for Americans to plot a new course for 2023.

The Federal Reserve is expected to begin easing its aggressive campaign to combat inflation, with a predicted half-percentage-point rate increase Wednesday. Though November’s consumer-price index shows that inflation has cooled a bit, Americans should take pains to protect themselves for the uncertain economic times ahead, advisers said.

Fed rate increases touch every corner of Americans’ financial lives, raising the cost of borrowing money to buy a home or car, and making it more expensive to carry a credit-card balance. With budgets stretched thin, credit-card balances ballooned this year. Since many Americans are also concerned about job security and the risk of a recession, advisers say to think longer term about your goals and safety net.

Rather than just make vague New Year’s resolutions to shore up your finances, it pays to put in place structures that help you adhere to your goals, said Adam Galinsky, a professor at Columbia Business School. “People should take a step back and say, ‘Where do I want to be, given this economic market? How can I set up commitments today?’” he said.

This time last year, interest rates on a 30-year fixed-rate mortgage were 3.10%, according to Freddie Mac. As of the week of Dec. 8, they had more than doubled to 6.33%. Rates for car loans and credit cards had similar increases.

These higher borrowing costs convinced many people to delay making big purchases in the hope interest rates would fall. That may be a mistake, said Malik Lee, founder of Felton & Peel Wealth Management. He suggests people retool their long-term plans and financial strategies for a high-rate environment.

“If you’re looking to buy something—a house, a car—these rates are not going back down to 3%,” he said. “So I’m telling my clients, we don’t want to time the market.’”

Though no one can predict when rates will come down, people shouldn’t count on them returning to 2021 levels soon, advisers said.

“I’ve heard it said ‘you marry a property but you date an interest rate,’” said Kristen Euretig, financial adviser and founder of Brooklyn Plans. “You do have options going forward if rates do go down, and if they go up, then you still got it at a price that was better than it could have been if you waited.”

The deciding factor should be one’s financial status and preparedness, not any particular external timing, she said.

If you haven’t built up emergency savings, now is the time, Ms. Euretig said. Lower prices for gas and energy may free up room in people’s budgets for some much-needed emergency planning.

“It’s not my client’s favorite goal to save for, but it is something I feel strongly about: Everyone needs an emergency fund,” she said. “I like to call it a stability fund, because saving for your own financial stability is perhaps more motivating.”

At the start of this year, online savings accounts such as Ally and Goldman Sachs’s Marcus were offering 0.5% in interest. Shopping around now for today’s best interest rates could pay much more. This week, those same accounts are offering as much as 3% in annual percentage yield. That means savers holding $1,000 in an account with Marcus, for example, would earn $30 in interest over 12 months—$25 more than they would have held at the previous rate.

Should you have more time and money, there are other savings products to consider. Inflation-protected U.S. savings bonds, known as I Bonds, are offering rates double that of online high-yield savings accounts. The composite rate for I Bonds issued between November 2022 and April 2023 is 6.89%, according to the Treasury Department. Rates on products such as certificates of deposit and Treasury bills, or T-bills, will also beat the rates on high-yield savings accounts, but the rate will vary depending on the length of maturation.

Write to Julia Carpenter at julia.carpenter@wsj.com

Because investor situations and objectives vary this information is not intended to indicate suitability for any individual investor.

This is for informational purposes only, does not represent legal or tax advice does not indicate suitability for any particular investor, and does not constitute an offer to purchase or sell investments.