One year ago, 401(k)s started taking some big hits as the stock market reflected fears of a Covid-19 recession. While many investors heeded the general advice to stand pat and give markets time to recover, there are times when investors are forced to make decisions regarding their accounts. 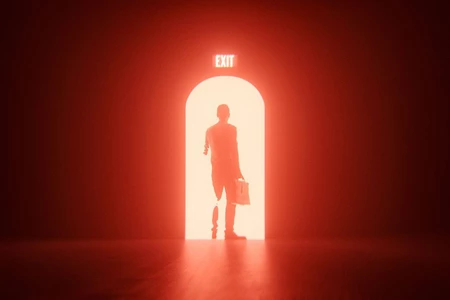 One of those moments is when you leave your employer—something many people are being forced to do these days. What you do with your 401(k) as you depart can have a big impact on your financial future.

Generally, a 401(k) plan participant leaving a job may choose to leave the money where it is; roll it over into a new employer’s 401(k) plan; roll it into an individual retirement account; or cash it out, which can be a costly move.

None of these decisions should be taken lightly.

“At the highest level, the decision to roll over from a 401(k) to an individual retirement account is often six of one, half a dozen of another; but the time when it’s different, you have to understand where those differences are,” says Joel Dickson, global head of enterprise advice methodology at Vanguard Group, one of the largest 401(k) record-keepers in the country.

What follows is a look at some of the most important factors in weighing whether to do a rollover, and to which type of account.

But if you leave your job anytime in or after the year you turn 55, it’s a different story. In that case, there is no 10% penalty for a withdrawal from a 401(k).

The “55 rule” doesn’t apply to IRA holders. For IRAs, a penalty-free withdrawal generally won’t be permitted until the account holder is 59½. For that reason, it might make sense for younger workers leaving a job to leave their money in the 401(k), if they believe they’ll need some of it before 59½.

Departing employees with less than $1,000 in a 401(k) can be cashed out by the plan sponsor and sent a check. John Nestico, senior counsel at Schneider Wallace Cottrell Konecky LLP, says most reputable record-keepers will send you a notice that they are going to cash you out and will send you a check unless you contact them to request the type of distribution you want within your plan’s options, including a rollover to an IRA or another qualified retirement plan.

For participants with $1,000 to $5,000 in a 401(k), the plan sponsor may also force them out, but must help set up an IRA, says Bonnie Yam, a 401(k) investment adviser at Pension Maxima Investment Advisory Inc.

In such cases, the plan sponsor will communicate with participants and give them the opportunity to choose their distribution option, says Mr. Nestico. For plan participants who don’t make a choice, the sponsor will then tell them it’s going to be rolled over and where.

The company sponsoring the IRA also has to notify the participants that it has created an IRA for them and send them the IRA documents, he says.

If you leave it to the sponsor, the money won’t immediately be allocated to the investments of your choice.

Opening an IRA can be a welcome change for former 401(k) participants who felt underwhelmed by their investment options.

John Iammarino, president and founder of Securus Financial in San Diego, says when people move from a 401(k) to an IRA, “they go from maybe 10, 20 or 30 options…to thousands of different options out on the open market.”

There are some 401(k) investments that aren’t offered in IRAs, says Dan Keady, chief financial planning strategist at TIAA. One example is stable-value funds, which are meant to preserve capital and provide liquidity while offering returns comparable to short-term bonds with less volatility. A small number of 401(k) plans also offer self-directed brokerage accounts, which participants can use to invest among an array of funds and individual stock offerings.

Access to lots of investment options could be detrimental if it encourages an investor to churn his portfolio, Mr. Dickson says. What’s important is whether you feel you have the investments you need to meet your asset-allocation needs and goals, he says.

“To me, it almost always makes sense to move to an IRA [when retiring] if you are actively managing it yourself or if you have an adviser helping you,” says Liz Miller, a certified financial planner and founder of Summit Place Financial Advisors in Summit, N.J. “You have complete flexibility to build a portfolio that meets your exact place in life and your exact needs.”

High expenses and fees can eat away at investment gains, particularly in retirement accounts which savers typically hold for decades. Many 401(k) plans offer funds with low-cost institutional pricing.

So while not every 401(k) features lower costs than an IRA, if your plan sponsor has negotiated a good plan lineup with lower fees, it will be hard for IRAs to compete with that, says Aron Szaprio, director of policy research at Morningstar.

Still, it pays to take a closer look, just to be sure, and plan sponsors are required to distribute full-fee disclosure to participants annually. Some plan fees, such as administrative expenses, “can be fuzzy and difficult to find,” says Christine Benz, director of personal finance at Morningstar Inc. “Often, high-cost investment options are a flag that a plan is expensive overall,” she says.

Cheap is great, but if you can get a good fund, with great professional management, then higher fees and expenses may be worthwhile.

Investors who don’t have the time or acumen to manage their own money can get professional help by investing in their 401(k)’s target-date or balanced fund or, perhaps, a managed account, in which an investment adviser builds a specific allocation for the participant for a fee. There also may be an adviser affiliated with your 401(k) plan who can offer limited advice, and some other advisers can advise on a 401(k) depending on how they are registered and if their firm permits it.

At Fidelity Investments, a managed-account option exists for 50% of the defined-contribution plans—primarily 401(k)s and 403(b)s—for which it keeps records.

Managed accounts aren’t a standard feature in 401(k)s, however.

“If you can get really good, high-quality unconflicted advice through an IRA, and you’re not getting that through your employer, a rollover might be beneficial,” Mr. Szapiro says.

A professionally managed IRA can be less expensive than a 401(k) plan. Mr. Iammarino says he recently rolled a client’s money out of a 401(k) in which he was paying 1.75% on assets managed annually, and into an IRA in which he is paying a 1.5% wrap fee, which includes asset management, trading costs, custodian costs and a variety of retirement planning services. The IRA uses low-cost ETFs, so the client will pay less even with their expenses, which can be as low as 0.15%, included, he says.

“If you need money consistently, [401(k)s] aren’t designed for that,” she says. “It becomes cumbersome; you have to fill out a form; it might even have to be notarized.”

About 60% of the defined-contribution plans for which Fidelity keeps records permit participants to take some partial automated or systematic withdrawals. The rest permit full payouts or partial withdrawals only through systematic-withdrawal plans for required minimum distributions. Some of the plans allow only annual withdrawals, while others offer only quarterly and/or monthly withdrawals, a spokeswoman at Fidelity says.

In addition, the default solution for plan participants is to take withdrawals on a “pro rata” basis, which means an equal portion of the money is taken from each investment in the retirement plan, the Fidelity spokeswoman says. But, the spokeswoman adds, most of the plans also allow participants to decide which investment to sell if they choose to.

Sri Reddy, senior vice president, retirement and income solutions at Principal Financial Group, says, “If you want liquidity and access to your money when you want it, an IRA may be a better option.”

Some employers will also allow plan participants to borrow from their 401(k) plans, then pay it back over time. IRAs don’t offer loans, but the government does allow for limited IRA distributions without penalty in some cases for education or to buy a first home.