Why Did Stock Markets Rebound From Covid in Record Time? Here Are Five Reasons 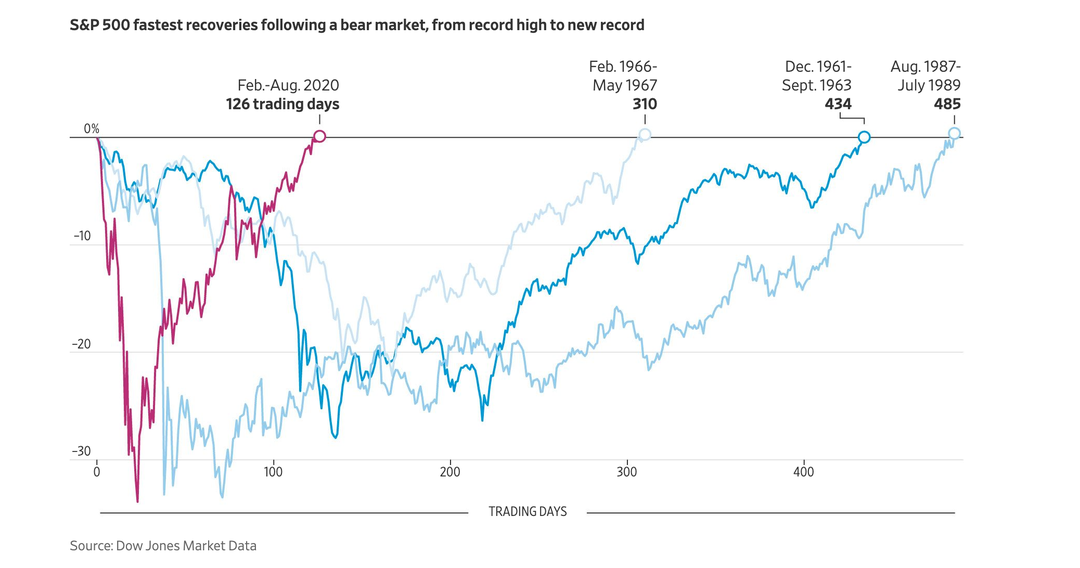 The Dow Jones Industrial Average’s wild round trip is nearly complete.
The venerable stock index, despite a recent hiccup, has nearly recovered all the losses suffered during the coronavirus pandemic, an epic journey during one of the most catastrophic economic collapses in U.S. history. 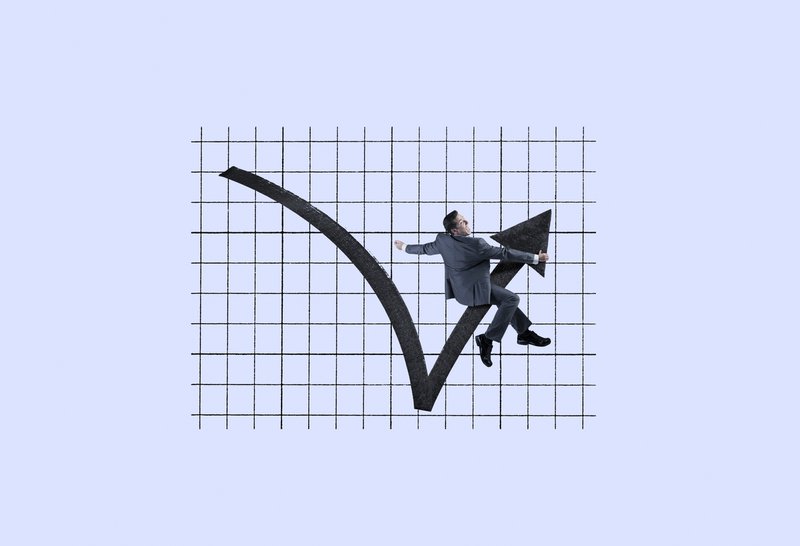 The Dow and the benchmark S&P500 plunged about 35% within six weeks this spring—the fastest-ever fall from record levels into a bear market—as the economy shut down and the virus spread across the country. Since then, U.S. stocks have been on a winning streak that is unprecedented in the modern era of financial markets.

The Dow is near Feb. 12’s all-time high, while the S&P 500 recently staged its most robust five-month rally in more than 80 years.

The S&P 500’s journey from record high to a bear market—defined as a drop of 20% or more—to a new record took just 126 trading days, the fastest-ever such climb. In previous downturns going back to 1928, it took an average of more than 1,500 sessions for the index to return to record levels, equivalent to about six years. 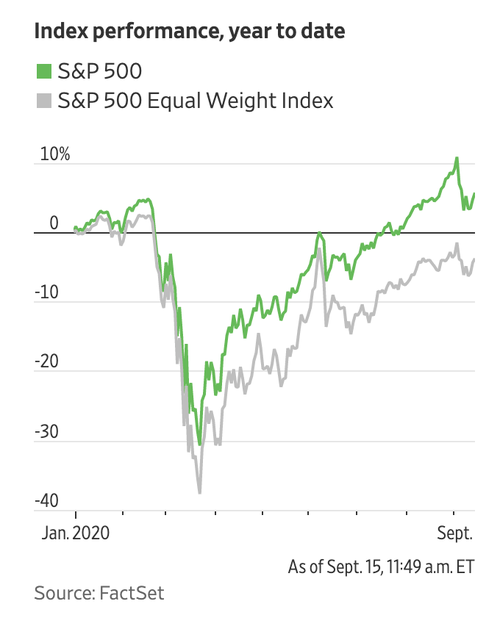 This year’s wild ride is even more striking against the backdrop of the recession and pandemic gripping the U.S. Millions of Americans remain unemployed, corporate profits have collapsed at the steepest rate in a decade and the pandemic hasn’t been contained.
Despite a two-week rout fueled by shares of big technology companies, U.S. stocks sharply rebounded to start the week.

“I don’t think there’s any analog in history that looks like this,” said Benjamin Bowler, head of equity derivatives research at Bank of America Corp.

Stimulus from the Fed and Congress

A key factor differentiating this crisis is the response of the Federal Reserve and U.S. government, which was speedier and mightier than ever before. The Fed cut interest rates to near-zero and outlined plans to lend billions of dollars across markets. The U.S. government sent more than 150 million stimulus checks to Americans and backed around half a trillion dollars in loans to small businesses.

The response, alongside lessons learned from the financial crisis of 2008, helped spark the stock market’s rebound. Many investors say history has taught them it isn’t wise to bet against the Fed. Wading into the market during swoons big and small has been profitable over the past 10 years.

That helped make the market’s recovery almost as jarring as the crash. 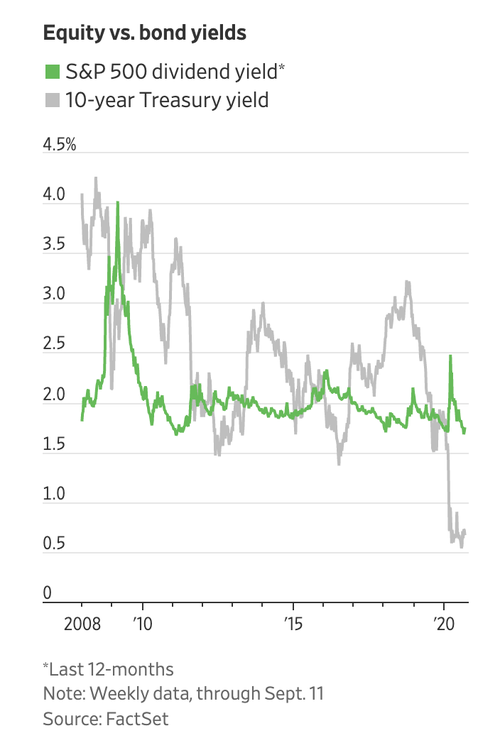 The Fed’s intervention had another unintentional effect: As it bought corporate and Treasury bonds, yields tumbled, making stocks even more attractive.

The real yield on Treasurys slipped to negative levels as bond prices rallied, meaning investors who park their money in government bonds can expect to lose money when adjusted for inflation. The dwindling returns pushed investors into stocks, a scramble that has become so familiar it has its own acronym: TINA, or There is No Alternative.

Expectations of a strong recovery

Underpinning the stock rally is an unwavering faith that the U.S. economy will bounce back once the pandemic is under control.

Many believe the worst has passed. Manufacturing activity accelerated in August, hiring has increased for four straight months and consumer spending has picked up after a precipitous drop.

Analysts say the skid in corporate profits has likely bottomed, too. Earnings among companies in the S&P 500 declined 32% in the latest quarter, the deepest drop since 2009, according to FactSet. They are expected to continue falling through the rest of the year, but at a more modest pace. Next year, analysts expect earnings to surpass levels recorded before the pandemic.

Meanwhile, private-sector economists expect annual gross domestic product to bounce back next year at a rate rarely seen in the past 70 years, according to the Leuthold Group, a research firm.

“Everything about this crisis has been outsized and has moved at warp speed,” Jim Paulsen, chief investment strategist at Leuthold, wrote in a note to clients in August. “If the economy continues its recovery and real GDP growth is anywhere close to the current consensus view, the stock-market bull may just be getting warmed up.”

Goldman Sachs Group Inc. analysts recently said they expect the S&P 500 to hit 3600 by the end of 2020, a 6.4% increase from Monday’s close. Bank of America analysts said they can envision a “melt-up” in which stocks continue to advance rapidly.

The dominance of the tech giants

The gap between the stock market’s winners and losers is stark and growing. Tech behemoths have benefited from societal changes forced by the pandemic and are increasingly influential in the market.

One of them, Apple Inc., is bigger than entire global markets. Apple shares have skyrocketed 57% in 2020 and were recently worth more than all of the small companies in the Russell 2000 index combined, or the FTSE 100 index, which tracks the biggest companies listed on the London Stock Exchange. Meanwhile, companies in industries battered by the pandemic have seen their sway in the stock market wane.

The five largest companies in the S&P 500—today that is Apple, Amazon.com Inc., Microsoft Corp., Google parent Alphabet Inc. and Facebook Inc. —recently made up about 23% of the index, the highest concentration in at least 30 years, according to Goldman Sachs analysts. Apple, the biggest company in the U.S. stock market, has contributed more than half of the index’s 4.8% total return this year, according to S&P Dow Jones Indices data through Friday.

Investors are betting that influence will grow as Americans continue working from home, and shopping and streaming movies online. Amazon shares have jumped 68% in 2020, Microsoft 30%, Facebook similarly 30% and Alphabet 13%.

One way to gauge the outsize influence of those stocks: A version of the S&P 500 that gives every stock an equal weighting is still down 4.4% in 2020, while the standard benchmark has climbed 4.7%. Within the S&P 500, the energy, financials, utilities, real-estate and industrial segments are still in the red.

The group’s heft can leave the broader market vulnerable to big declines. The tech giants pulled the market lower last week as concerns grew about whether they had risen in value too far, too fast.

In one sign of the energy sector’s diminishing influence, Exxon Mobil Corp. was recently dropped from the Dow industrials, ending a tenure that dated to 1928. Energy now makes up less than 3% of the Dow and S&P 500.

“The stock market is comprised of the biggest and strongest companies…. It is not representative of the entire economy,” hedge-fund billionaire William Ackman, founder of Pershing Square Capital Management LP, wrote in a recent letter to shareholders. “If there were a stock market index of private, small businesses, it would likely be down 50% or more.”

Mr. Ackman has raised $4 billion in an initial public offering of his blank-check company. Such firms, which are designed purely to raise money to make acquisitions, have grown in popularity this year as investors bet there will be attractive deals when the pandemic subsides.

The return of individual investors

It is impossible to ignore the stampede of individual investors entering the stock market. During the first six months of the year, they made up roughly 20% of market activity, nearly double the level from 2010, according to Bloomberg Intelligence. It has never been easier to trade.

Novices stuck at home during the pandemic opened brokerage accounts, enticed by rock-bottom commissions and the chance to profit from stocks’ gyrations. The market moves have also brought in younger investors trying their hand at stock or options trading.

These newbie investors are trading tips on Facebook groups and swarming discussion forums on Reddit. They are following stock-market influencers on social media platform TikTok and chatting with other young traders round the clock on the messaging platform Discord.

“When I talk to people with gray hair, they all feel nervous about this market,” said Zhiwei Ren, a portfolio manager at Penn Mutual Asset Management. “It is a very dangerous market. For retail investors, it’s the best market.”

Many of these investors, alongside institutional players, have piled into stocks they view as beneficiaries of the pandemic, or those that they think can reshape industries.

Sports-betting operator DraftKings Inc. has rallied 354% to a record, while human-spaceflight company Virgin Galactic Holdings Inc. has jumped 51%. Individual investors also flocked to shares of Eastman Kodak Co. after a disclosure of a possible $765 million government loan to make drug ingredients at U.S. factories. That helped drive them up as much as 614% before they lost most of those gains.

And, of course, there is Tesla Inc. which has gained 402% this year, making it the most valuable auto maker in the world, the eighth largest company in the U.S. stock market and one of the most hotly debated companies.

Interest—both in trading and Tesla—has swelled. As of June, posts tied to #stockmarket had garnered about 250 million views on TikTok. By September, that figure swelled to about 420 million views. One popular post: “How To Invest in the ‘Next Tesla.’ ”

In many ways, Tesla epitomizes today’s market, in which retail and institutional investors have chased companies promising high growth. The car maker has become synonymous with 2020’s hot momentum trade—piling into stocks that have climbed the fastest and furthest. Few stocks can match the velocity with which Tesla has soared.

Data from Société Générale SA as of June show that individual investors tend to prefer stocks that have risen the most over the past three months. Traders using the Robinhood Markets Inc. brokerage increased their holdings of such shares dramatically since March, outpacing investments in companies with the worst price performance. Investors have also piled into exchange-traded funds tracking the momentum trade.

And like the broader market, Tesla has been painfully difficult to bet against. Few saw its dramatic rise coming, and the ascent continues to alarm, and burn, many investors who sought to profit from its demise.

Technical dynamics help explain the stock’s mind-boggling gains, since bearish wagers on the company have inadvertently fueled Tesla’s rise, and derivatives bets tied to its advance have helped intensify the rally.

Many investors aren’t just buying small dips in the stock market or individual shares like Tesla. They are looking for turbocharged trades that profit when individual stocks quickly rise and, at times, borrowing money to bet big.

Stock-options volumes jumped to a record this year, and trades that pay out if stocks continue to soar have been popular in recent months. These derivatives, known as call and put contracts, allow investors to put down a small amount of cash for a potentially quick and outsize return if their bets prove correct. Although they can magnify profits, they are extremely risky.

These trades are increasingly influential on the stock market itself. Mammoth options bets by big investor SoftBank Group Corp. helped drive the market’s recent roller-coaster, along with trades from individual investors.

Barclays research shows that stocks benefiting from the highest increase in options trading over the past year have outperformed the market this year. In addition to Tesla, these stocks include Amazon.com, Apple, Microsoft, Shopify Inc., among others.

“You’re getting a real squeeze that’s bigger than it normally would be,” said Cem Karsan, a senior managing partner at hedge fund Aegea Capital Management LLC. He says he has bet against some tech stocks this year and bought options that would profit if the tech sector soared through the end of the year. “These things always go further than you could possibly imagine.”