Why U.S. Markets Boomed in a Year of Human Misery

The central, befuddling economic reality of the United States at the close of 2020 is that everything is terrible in the world, while everything is wonderful in the financial markets. 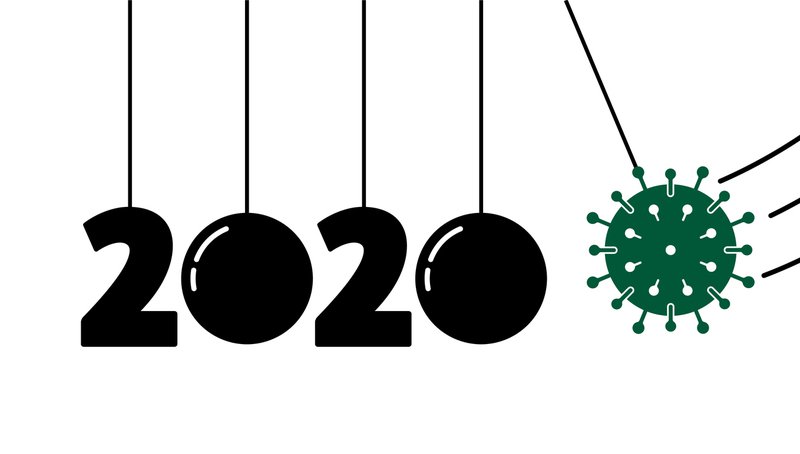 It’s a macabre spectacle. Asset prices keep reaching new, extraordinary highs, when around 3,000 people a day are dying of the coronavirus and 800,000 people a week are filing new unemployment claims. Even an enthusiast of modern capitalism might wonder if something is deeply broken in how the economy works.

To better understand this strange mix of buoyant markets and economic despair, it is worth turning to the data. As it happens, the numbers offer a coherent narrative about how the United States arrived at this point — one with lessons about how policy, markets and the economy intersect — and reveal the sharp disparity between the pandemic year’s haves and have-nots.

It starts, as so many epic tales do, with a table of data from the National Income and Product Accounts — namely, “Personal Income and Its Disposition, Monthly.”

This report captures how Americans are earning and spending, two activities that the coronavirus drastically altered in 2020. By combining the numbers from March through November (the latest available) and comparing them with the same period in 2019, we can see more clearly the pandemic’s whipsaw effects.

The first important observation: Salaries and wages fell less, in the aggregate, than even a careful observer of the economy might think. Total employee compensation was down only 0.5% for those nine months, more akin to a mild recession than an economic catastrophe.

That might seem impossible. Large swaths of the economy have been shut down; millions are out of work. The number of jobs employers reported having on their payrolls was down 6.1% in November compared with a year earlier, according to separate Labor Department data.

So how can the number of jobs be down 6% but employee compensation be down only 0.5%? It has to do with which jobs have been lost. The millions of people no longer working because of the pandemic were disproportionately in lower-paying service jobs. Higher-paying professional jobs were more likely to be unaffected, and a handful of other sectors have been booming, such as warehousing and grocery stores, leading to higher incomes for those workers.

The arithmetic is as simple as it is disorienting. If a corporate executive gets a $100,000 bonus for steering a company through a difficult year, while four $25,000-per-year restaurant workers lose their jobs entirely, the net effect on total compensation is zero — even though in human terms a great deal of pain has been incurred.

So wages, salaries and other forms of workers’ compensation dropped only a little — $43 billion over the nine months — despite mass unemployment. But there is more to the story.

For all the attacks on the coronavirus relief bill that Congress passed in late March, the degree to which it served to support the incomes of Americans, especially those who lost jobs, is extraordinary.

Americans’ income from unemployment insurance benefits was 25 times higher from March through November 2020 than in the same period of 2019. That partly reflects that millions more jobless people were seeking benefits, of course. But it also reflects a $600 weekly supplement to jobless benefits that the act included through late July — along with a program to support freelance and contract workers who lost jobs and who otherwise would have been ineligible for benefits.

In total, unemployment insurance programs pumped $499 billion more into Americans’ pockets from March to November than the previous year; $365 billion of it was a result of the expansion in the coronavirus relief bill.

The $1,200 checks to most U.S. households that were included in that legislation contributed a further $276 billion to personal income — much of which accrued to families that did not experience a drop in earnings.

And the law’s signature program to encourage businesses to keep people on their payrolls, the Paycheck Protection Program, prevented a collapse in “proprietor’s income” — profits that accrued to owners of businesses and farms. This income rose narrowly, by $29 billion, but would have fallen by $143 billion if not for the PPP and a coronavirus food assistance program.

These are remarkable numbers. When it’s all tallied up, Americans’ cumulative after-tax personal income was $1.03 trillion higher from March to November of 2020 than in 2019, an increase of more than 8%. Some of the pessimism among economic forecasters (and journalists) in the spring reflected a failure to understand just how large and influential those stimulus payments would turn out to be.

But income also is only part of the story. Big changes in 2020 also took place on the other side of the ledger: spending. 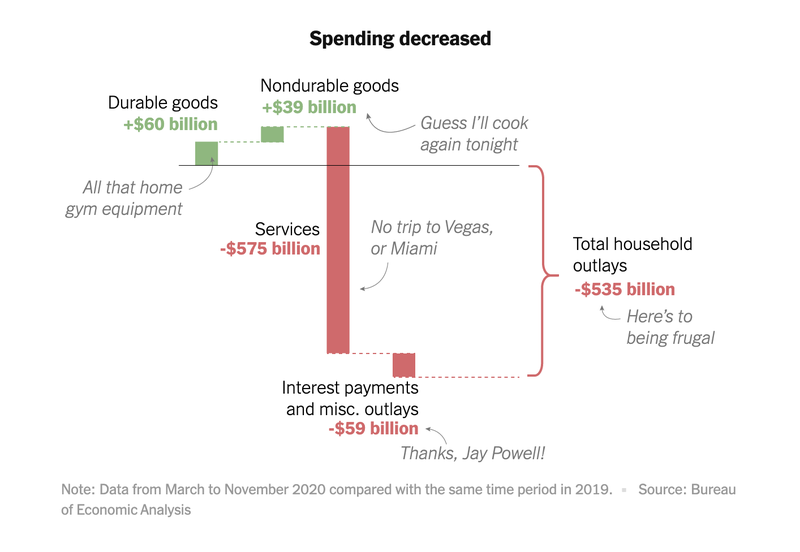 By turning to another riveting story, “Personal Consumption Expenditures by Major Type of Product, Monthly,” we see a pattern that may seem obvious with hindsight but was not as easy to predict while the economy was collapsing during the spring.

The obvious part was a decline in spending on services. All those restaurant reservations never made, flights not taken, and sports and concert tickets not bought added up to serious money. Services spending fell by $575 billion, or nearly 8%.

Less obvious were some of the other patterns affecting consumer spending in a pandemic. Americans spent meaningful dollars — those they would not or could not spend on services — on stuff. Durable goods spending was up by $60 billion (a better chair for working from home, or maybe a new bicycle), while nondurable goods spending rose by $39 billion (think of the bourbon purchased for consumption at home that in an alternate universe would have been logged as “services” consumption in a bar).

But the extra spending on stuff did not exceed the drop in spending on services. And thanks to lower rates, households’ personal interest payments and other miscellaneous outlays dropped by $59 billion.

Not only were U.S. households, in the aggregate, taking in more money, but they were also spending less of it. Total outlays fell by $535 billion. 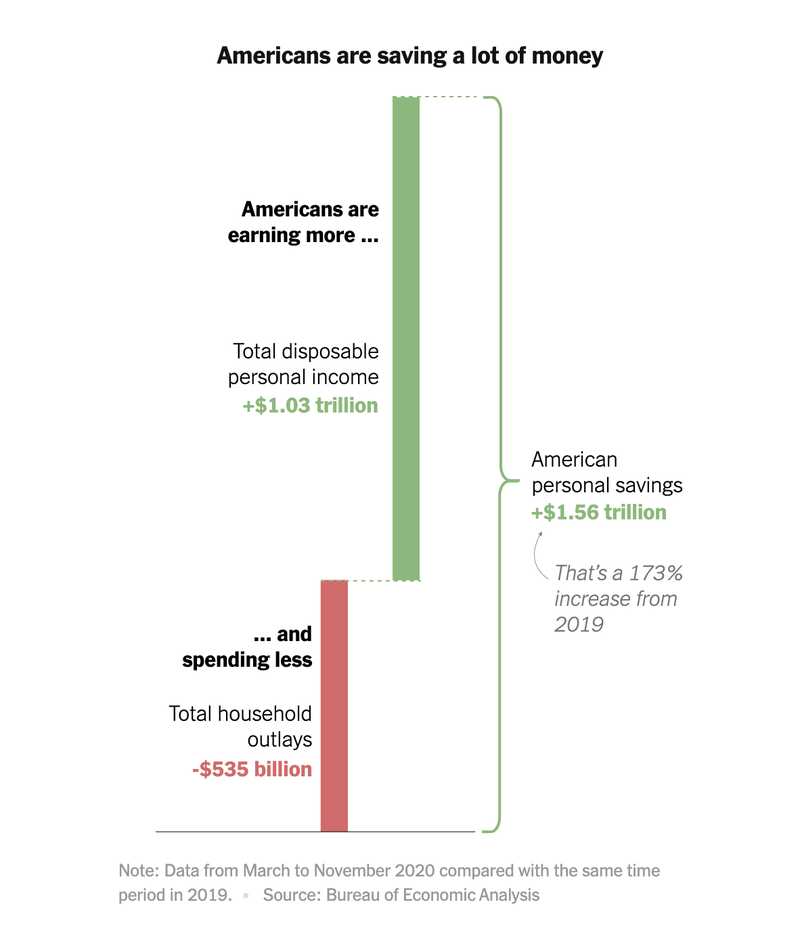 This combination of soaring personal income and falling spending pushed Americans’ savings rate through the roof. From March through November, personal savings was $1.56 trillion higher than in 2019, a rise of 173%. Normally the savings rate bounces around in a narrow range, around 7% just before the pandemic. It spiked to 33.7% in April, its highest level on record dating to 1959.

Even as millions of individuals faced great financial hardship this year, Americans in the aggregate were building savings at a startling rate. It had to go somewhere. But where? Holding on to extra cash was one option — and sure enough, currency in circulation has spiked by $260 billion since February, a 14% increase. Deposits in commercial banks are way up — by 19% since the first week of March.

Or, for those a little more comfortable with risk, there was investing in stocks, which helps explain the 16% rise in the S&P 500 for 2020. For those comfortable with a lot of risk — and with taking advantage of the market’s momentum — there was buying a market darling stock like Tesla or trading options.

Or you could have used the occasion of the pandemic to buy a new house. Home sales surged, and the S&P CoreLogic national home price index was up 8.4% in October from a year earlier.

Essentially, the rise in savings among the people who have avoided major economic damage from the pandemic is creating a tide lifting the values of nearly all financial assets.

Certainly the Federal Reserve plays a role. The central bank has lowered interest rates to nearly zero, promised to keep them there for years, bought government debt and supported corporate bond markets. But the surge in asset prices has made its way into many sectors far from any form of Fed support, like stocks and Bitcoin. And the surge had, if anything, accelerated this fall despite a lack of additional stimulative action from the Fed.

The Fed played a big part in engineering the stabilization of the markets in March and April, but the rally since then probably reflects these broader dynamics around savings.

Just because you can explain these market gains does not mean that high asset prices will hold. You could tell a story in which the economy roars back as people are vaccinated, and the entire pattern reverses itself, with the savings rate turning negative as Americans spend down their stockpiled wealth on trips and other luxuries that were off-limits in 2020. It could spur inflation, which, if severe enough, could cause the Fed to back off its easy money approach sooner than people now think.

But the 2021 economic narrative has yet to be written — and if 2020 teaches one thing, it is that the story arc is more unpredictable than you might think.